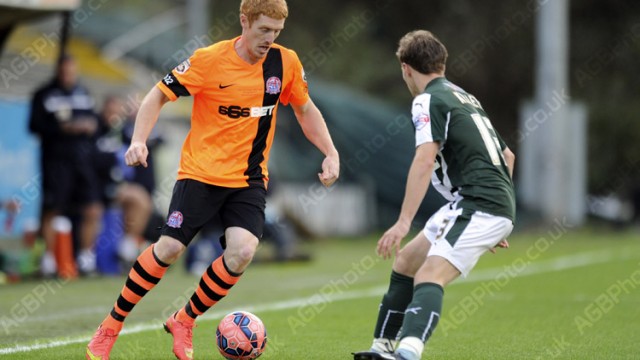 AFC Fylde attacker Mike Barnes was happy with the way he and his team mates played in Saturday’s FA Cup First Round tie at Plymouth and puts the defeat down to simply not taking the chances that were handed to them.

Speaking to Ben Yaffe after the game, Mike said: “The fact we lost was because we just didn’t take our chances.  I had a one-on-one with the keeper in the first half and so did Richie which were two good chances and we had a couple of crosses that went across the box so all it takes is for one of them to go in and it changes the complexion of the game altogether.

“And if one of those goes in when you’re 1-0 down and it goes to 1-1, the way were pushing on in the second half you never know what could have happened.”

This was the club’s biggest game since entertaining Accrington Stanley at this same stage two seasons ago and Mike added: “I thought we did alright to be honest what with them being a couple of leagues above us, especially in the second half where we unlucky not to take our chances.

“For me personally it was nice to come and play at a nice stadium, a decent pitch and in front of a decent crowd.  It’s what everybody wants to do so, yeah, it was good.”

Both of Plymouth’s goals came from corners and when asked about why so many have been conceded in this way this season, Mike was quick to praise the performances of his defensive team mates: “We’ve noticed that in the last couple of games that we’ve conceded a few from headers at corners but these are the things you have to work on in training but we’ll make sure we put that right.

“But on a plus side, the lads at the back have been brilliant all year and we haven’t conceded that many goals and if you look at the other teams in our league, we’ve only conceded eleven goals, which is brilliant, so we’ll put that right and go again.”

Looking ahead to the rest of the season, Mike is confident Fylde can finish as high as possible after the start his side have made: “In terms of pushing on for the rest of the season if we keep playing the way we have been, and we had a couple of results go our way in the league today, and we keep scoring the goals like we have been doing, I don’t see any reason why we can’t be up there at the end of the season fighting for promotion again.  That’s our goal and it has been since the beginning of the season.”

Mike has been one of Fylde’s most consistent performers this year and was open about his personal ambitions and targets for the 2014/15 campaign: “Obviously being a forward player my aim for this season is to score as many goals as possible and help create as many goals as I can.  I’ve got six so far so you try and aim for the targets you set yourself each season, such as 15 before Christmas and try and get to the 20 mark after that.”

Watch the full interview with Mike Barnes on the club’s YouTube channel or click on the link above.