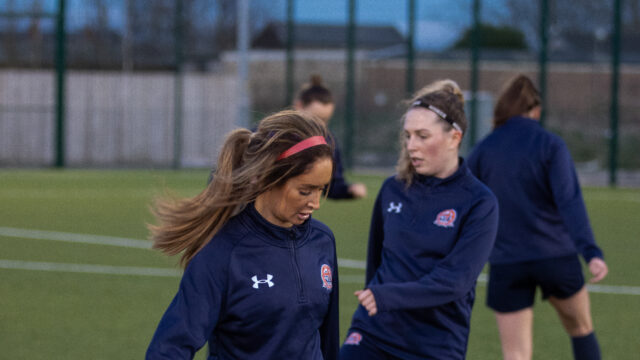 Merrin: “Anything can happen in the FA Cup, that’s what makes it so exciting.”

Winger, Laura Merrin, is hoping her Coasters side can cause an upset when they travel to Padiham to face Burnley Women at the weekend (2 pm), with a home fixture against Sunderland or Sheffield FC on offer for the winner.

“We’re excited to finally be able to play,” the New Zealand international explains. “With having no other games to prepare for, this game means a lot to everyone. Our aim is to get as far as possible.

“Anything can happen in the FA Cup and that’s what makes it so exciting.”

Joint-managers Kim Turner and Danielle Young welcomed the girls back to training on Monday evening, and throughout the course of the week have been physically and psychologically preparing their players for the challenge that lies ahead.

Prior to their long-awaited return, regular Zoom calls were how the group stayed in contact throughout lockdown, something that Laura expressed her gratitude for:

“Sometimes it can be hard to find the motivation to train, especially when you have to do it alone – but the Zoom sessions helped us stay connected with each other. It helped keep us in a routine, which I think was important both mentally and physically.

“We’re a really close group of girls, so it’s been so nice to finally see everyone again.”

Fylde Women were in tantalising form in the FA Womens National League before its suspension last month, having won six of their eight games before Christmas. Second-placed Fylde were six positions above Sunday’s hosts Burnley, who they defeated 2-1 back in September. The league’s premature ending has left a sour taste for all associated with The Coasters, but Merrin is determined to use those frustrations to fuel a magical FA Cup run:

“It’s been really hard and very disappointing to know our league is over, especially when we were doing so well and had a chance of promotion. But our focus now shifts to the Burnley game. We know that if we win then we get to keep playing which is what everyone wants.”

Please note that Sunday’s game will be played behind-closed-doors.