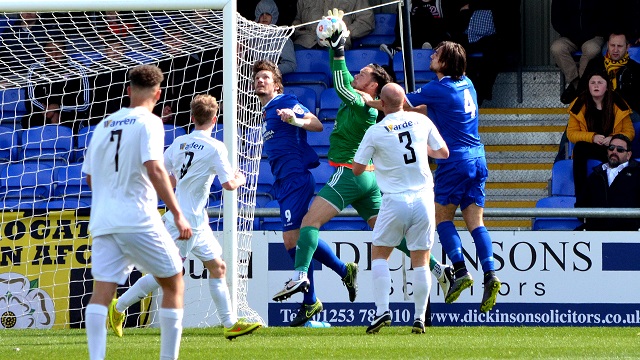 AFC Fylde shot stopper Matt Urwin is desperate to keep his place in the side following his man of the match performance last time out against Harrogate Town.

Urwin has been jostling with fellow goalkeeper Ben Hinchliffe for the No. 1 jersey for much of the season and is now keen to see out the remainder of the campaign as first choice ahead of this weekend’s clash against Worcester City.

“I was obviously really pleased to be back in the team last weekend. It was great to get back playing. I haven’t been playing for the last few weeks and it’s felt like a long time but hopefully now I can stay in the side.

“When I see my name on the team sheet I just try to be professional and do as much as I can to deserve my place.

“I felt like I could probably have done a little better with the goal we conceded at the end against Harrogate, but other than that I thought I did really well.

“Personally I would love to be in the team for the play-offs if possible, but I’m sure whoever plays between myself and Ben will do their utmost to make sure we are successful.

“We get on really well and that has never been an issue but obviously we both want to play. There is no question that whoever is selected will do their best and hopefully help the club to promotion.

Fylde have had to settle for a place in the play-offs for the second season running after missing out to runaway leaders Solihull Moors and the former Blackburn Rovers stopper admits the club’s form has mirrored his own at times.

“I think we have had a stop-start season. If we had shown consistently what we have shown in glimpses then I think we would have challenged for the title more than we have in the end.

“The season has been similar for me on a personal level. I think I’ve done well when I’ve been in the team but I haven’t been playing as much as I would have liked.

“When I get the chance I always try to grab it with both hands but it’s difficult when we have two very good goalkeepers here competing for one place.

Fylde have just one league game remaining before the play-off drama unfolds in less than a week’s time and could still pip North Ferriby United to the runners up spot.

However, it looks likely that the Coasters will line-up against Harrogate for the second time in ten days and Urwin is relishing another match against the Yorkshire outfit.

“It would be fantastic if we won promotion. We have a great set of lads here and if we can play to our potential then we have a great chance.

“If we do end up playing Harrogate again then I think it will be a more difficult test this time around as players inevitably raise their game for the big matches. Plus I think they had a few missing at the weekend. It will be a great game I’m sure and one that we are all very much looking forward to.”