AFC Fylde came back from a goal down to record a draw at fellow strugglers Chesterfield, but will be disappointed that it wasn’t three.

Jamie Proctor was handed his full debut, whilst club captain Lewis Montrose returned to the squad at the heart of midfield.

The game started a tense, tight affair – with the Spireites looking to utilise the physical presence of forward Tom Denton.

Cropper looked to pick both Denton and Boden out in the box, but their headed efforts weren’t troubling Sam Hornby in the Coasters net.

The Coasters first real chance came after Haughton’s drive at goal freed up space to Proctor, who slipped in Croasdale – but his powerful effort hit the side netting from just inside the box.

Curtis Weston came close at the other end, as he caught a right footed volley sweetly after a corner was cleared – but thankfully, it whistled past Hornby’s post.

The Coasters were growing in confidence though and although they looked the more likely to open the scoring, found themselves behind.

After Nick Haughton had slipped Jordan Williams through one-on-one, it seemed as if the forward would open the scoring – but Jalal rushed out to win it off him, and set Chesterfield on a counter attack.

The ball soon fell to Jonathan Smith, who struck a fantastic left-footed effort, which gave Sam Hornby absolutely no chance.

This gave Chesterfield the advantage at the break, with the Coasters heading in wondering how they were behind. 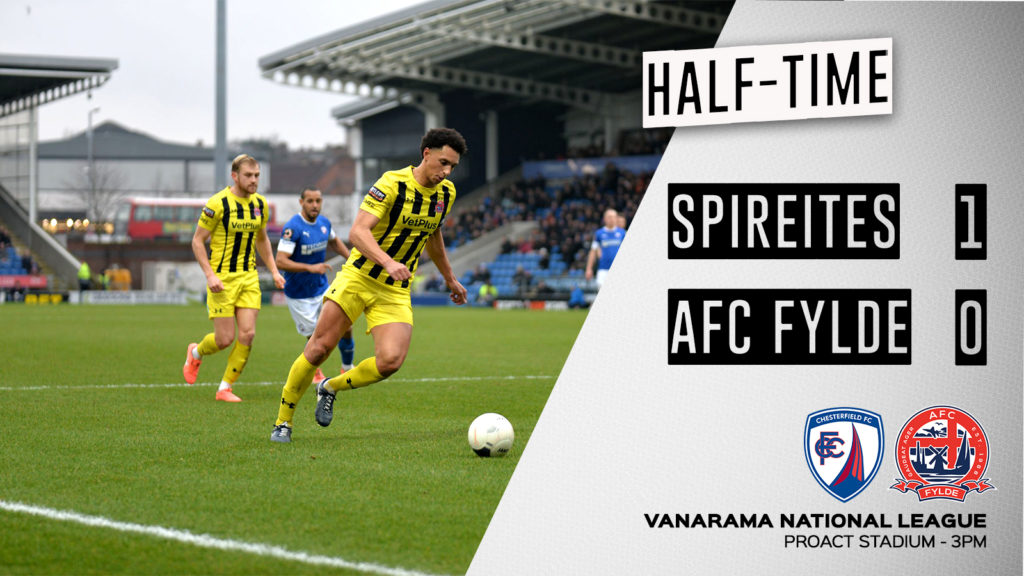 The Coasters started the second half the better of the two teams, and almost levelled things very quickly.

Tom Walker latched onto a ball disguised by a clever Nick Haughton feint, and took a touch goal wards – but flashed his effort inches wide of the far post.

After a couple of changes for the hosts, which included the introduction of recent loan signing Nathan Tyson, they looked a lot more composed.

Fylde kept working though, and in a near carbon copy of the first half, Haughton slipped Jordan Williams on goal.

Once more though, Jalal came out on top, rushing out quickly to foil Fylde’s top goalscorer.

Before long though, the Coasters did find the back of the net – with Nick Haughton the man causing problems once again.

A switch off at the back for Chesterfield allowed Haughton to latch onto a long ball, and thump home a swerving half volley from the corner of the box, with Jalal unable to get a hand to it.

It was no less than the Coasters deserved, and with 15 minutes still on the clock – there was time to look for a winner.

Chesterfield, however, woke up after this – and hit the woodwork as Evans rose highest to a corner, sending a looping header bouncing off of the post.

With the clock ticking, the Coasters looked most likely to win the game – and the golden chance again fell to Jordan Williams.

After Yeates had controlled Dan Bradley’s cross, Williams tried an audacious back heel from inside the six-yard box – with everyone waiting for the net to bulge.

Jalal, however, had got the better of Williams once again – and made a smart stop low to his left to deny him.

This was the last key chance before the referee bought the game to a close – and although it wasn’t three points for the Coasters, it was another positive performance to build on.