AFC Fylde couldn’t hold on to claim all three points at Eastleigh, despite a healthy two goal lead at half time.

The Coasters reverted to the team that started the league clash against Boreham Wood, with four changes made to the weekend’s FA Trophy side.

Jamie Proctor and Tom Walker were amongst those included in the starting XI, and they combined in the 32nd minute to give the Coasters the lead.

After good work from Tom Miller, who came on in place of the injured Andy Taylor 20 minutes in, Proctor was found in space in the final third.

Proctor did well to judge the overlapping run of Tom Walker, sliding him in one-on-one with Eastleigh goalkeeper Stryjek.

Walker finished with a fantastic left-footed effort, curling it into the bottom corner – just beyond the reach of the Eastleigh keeper.

Following an early injury for Godwin-Malife, eight minutes of injury time were indicated – with the Coasters capitalising on this.

It was the combination of Walker and Proctor which unlocked the Eastleigh defence once again, with Walker this time turning provider.

Drifting in off the left wing, Walker picked out Proctor on the edge of the box, who had time to set himself, before firing a fantastic effort low into the bottom left corner.

After a stop start half, the Coasters had seemingly found a clinical edge they had recently lacked – and went in the much happier of the two sides. 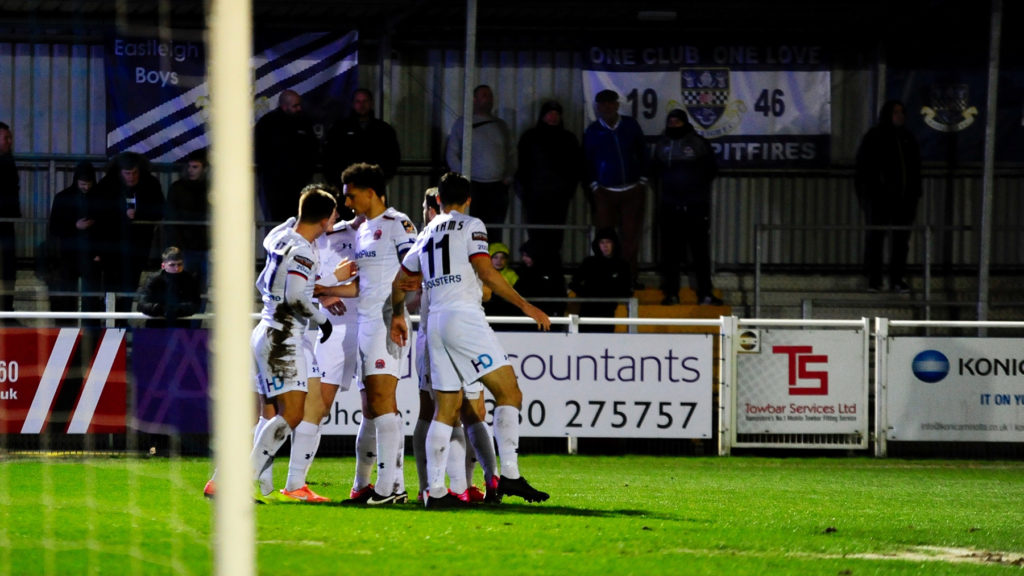 The Coasters started the second half on the front foot, and went close to making in 3-0 when Ryan Croasdale’s first time effort looked destined to curl into the top right corner.

Stryjek however clambered across to make a fantastic save, denying Croasdale, and keeping his side in the game.

Soon after, the hosts had halved the deficit, and after Ryan Croasdale failed to deal with a ball in the box, Eastleigh capitalised.

It was easy for the winger Smart to pick out a blue shirt, and Spitfires captain Danny Hollands pounced to fire it home from inside the penalty area.

Galvanised by the goal, and with the home support cheering them on, Eastleigh continued to push for the equaliser.

Coasters’ captain Lewis Montrose can perhaps count himself lucky not to have been sent off after a rash tackle in midfield, which started a mass confrontation after.

Heading into the last twenty minutes, the Coasters looked to defend their lead – but after Smart darted into the box, he was bought down by Luke Burke.

On-loan forward James Alabi stepped up to the spot-kick, and cooly converted past Sam Hornby, levelling the tie.

In the final five minutes, both sides had chances to win the game – with Dan Bradley and Jamie Proctor going close.

The Coasters let out a sigh of relief of their own, when Danny Hollands late strike crashed off of the post, and Miley’s rebound sailed over.

The final whistle came, and the Coasters were made to settle for a point when all three looked certain.

The chance to make it right, thankfully, comes quickly – as the Coasters host Maidenhead United at Mill Farm on Saturday.