AFC Fylde fought from two goals down to salvage an important point in the North-East, after former striker Gime Toure’s brace was cancelled out by Kosylo and Croasdale.

It didn’t take long for Toure to remind his former side what he could do. After just three minutes, Toure picked up the ball on the edge of the penalty area, before unleashing an effort that flew into the top right corner.

The Coasters looked a little shellshocked, and despite Neill Byrne heading over from a Haughton corner, the home side looked lively on the break, the home crowd roaring on their side’s every attack.

From here on in, The Coasters dominated possession – with Nick Haughton and Rowe combining on fifteen minutes, but Haughton’s effort in the box was over the bar.

Fylde had to be wary of Pools on the counter though, as Luke Burke nearly found out, after being dispossessed in his own half. Neill Byrne came to the rescue, closing off Niko Muir, and preventing what no doubt would have been a Hartlepool second.

As the half progressed, the Coasters looked more likely to make something happen, and five minutes before the interval, Nick Haughton nearly levelled the game.

Despite being in a cross position, Haughton struck the ball sweetly and it swerved goalwards, catching Ben Killip completely by surprise.

The ball thundered off of the post and back into play, but in the ensuing chaos, Killip found himself tangled in the goal net.

In utterly bizarre circumstances, the keeper began panicking and tried his best to free himself of the goal net – all whilst the Coasters tried to fashion an effort goalwards.

Luckily for Killip, the Pools back four defended well, and he was able to wriggle free of the net, and the crisis was diverted.

It could have been two at the break, as Muir’s long-range effort nearly punished some lapse defending – but the strike bounced off of the post and clear. 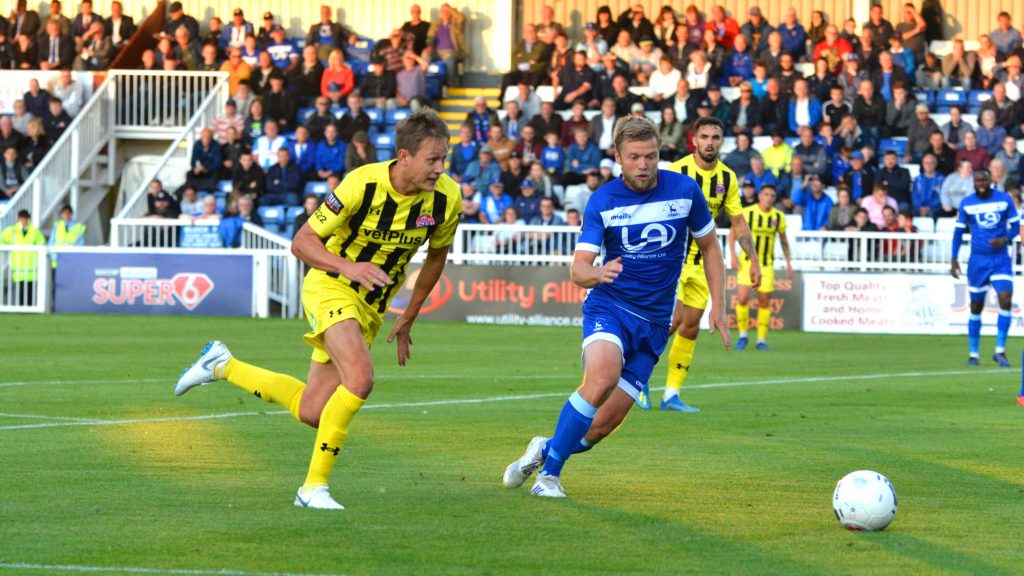 Trailing in the first half was enough to prompt a double change at the break for Challinor, introducing Kosylo and Yeates in place of Burke and Williams.

Kosylo and Duxbury looked to combine quickly, with the pace and energy down the left hand side causing problems for Hartlepool straight away.

Duxbury’s crossing ability has perhaps been Fylde’s most consistent threat so far this season, and it proved to be the case again, with Kerr and Raynes having to be on form to ensure these were dealt with.

Despite this being the most consistent outlet, it was almost Fylde’s undoing too – after Duxbury’s blocked cross was quickly dealt with, and Hartlepool mounted another counter-attack.

Featherstone’s through ball found a now confident Toure who, getting the better of Craigen, combined a few stopovers with another brilliantly taken finish into Montgomery’s top right-hand corner.

It took 20 minutes for AFC Fylde to find their way back into the game, and they did so through a first club goal for Matty Kosylo.

Rowe, who had taken up a wide right berth, sent a searching cross deep into the Pools box, aimed at both Croasdale and Kosylo.

The two both seemingly got a touch on the cross, but Kosylo’s was the decisive one, steering it into the bottom right hand corner.

Then, just three minutes later, the Coasters were level, and in a very similar circumstance to how the first was scored.

Rowe, again on the right hand side, delivered into the box –  this time his cross was higher though, and it found the advancing Croasdale.

Croasdale steered it goalwards, connecting with it in a mix of head and shoulder, looping up into the air and into the top right corner.

The game came to a grandstand finish, with Hartlepool’s Niko Muir going closest to finding a winner, heading wide of the post deep into injury time.

It was Fylde who would be the happier of the two sides though, with a hard-earned point taken back to Lancashire.

“It takes many things to be a successful side, and character is one of them,” said Challinor on his team’s comeback.

“We needed a break, and we got that with the goal, and of course, goals do change games.”

Gime [Toure] is a threat, we know what he’s about, he’s unpredictable – but ultimately for him it’s about doing that on a consistent basis.”

“They were always going to try and defend their lead, and we had them camped in in the second half, so getting the second in quick succession changed the outlook.”