AFC Fylde booked their place in The Buildbase FA Trophy semi-final, after penalty shootout drama decided their tie with Barnet.

The encounter began with an early test for the Barnet keeper, as Nick Haughton bought himself space and found Tasdemir, who layed off an onrushing Birch – but his cross was collected by Mark Cousins.

The game stayed a tight one all afternoon, as the opening 15 minutes saw both sides patiently building up their attacks, looking for that incisive breakthrough.

After Mason-Clark’s low effort into the side netting, the Coasters were forced into their first change, as Philliskirk replaced a somewhat tentative Croasdale – who headed straight down the tunnel to receive treatment.

A short corner from Barnet looked to catch the Coasters out, as Harry Taylor’s cross picked out Robson, but Tunnicliffe was equal to him in the air.

Fylde’s first real effort came from a fantastic half-volley from Haughton, after Philliskirk’s flick-on found Haughton in space – but Cousins was equal to the stinging volley on the edge of the box.

Next, it was Barnet’s turn, as Medy sent a curling effort goal bound from distance, but Lynch was there, as usual, to fly across and deny the effort.

This was then followed by a further blow for the Coasters, as 25 goal man Danny Rowe signalled to the bench, and Alex Reid swiftly replaced him.

His introduction was almost a perfect one, as he raced onto a whipped ball from Birch, heading just wide of the goal.

Patient build-up play from the Bees saw the ball full kindly to Fonguck on the interval, but his effort was low and held easily by Lynch.

A quick start from the Coasters saw Birch swing a ball into the box, which was cleared as far as Bond, but his effort was miscued.

Philliskirk, who scored his first goal for the Coasters against Barnet, was shown space to shoot, sending an effort just over the bar from distance.

Then, a foul from Tasdemir on Mason-Clark 25 yards from goal saw the Bees, which Medy took, firing into the wall, only for Barnet to quickly win another free-kick.

Perhaps Fylde’s best chance of the game followed, as Haughton carried the ball excellently as space opened up, laying it through inch-perfectly to Andy Bond.

However, Bond’s effort from close range shanked wide of the goal, in what was a gilt-edged opportunity to take the lead. 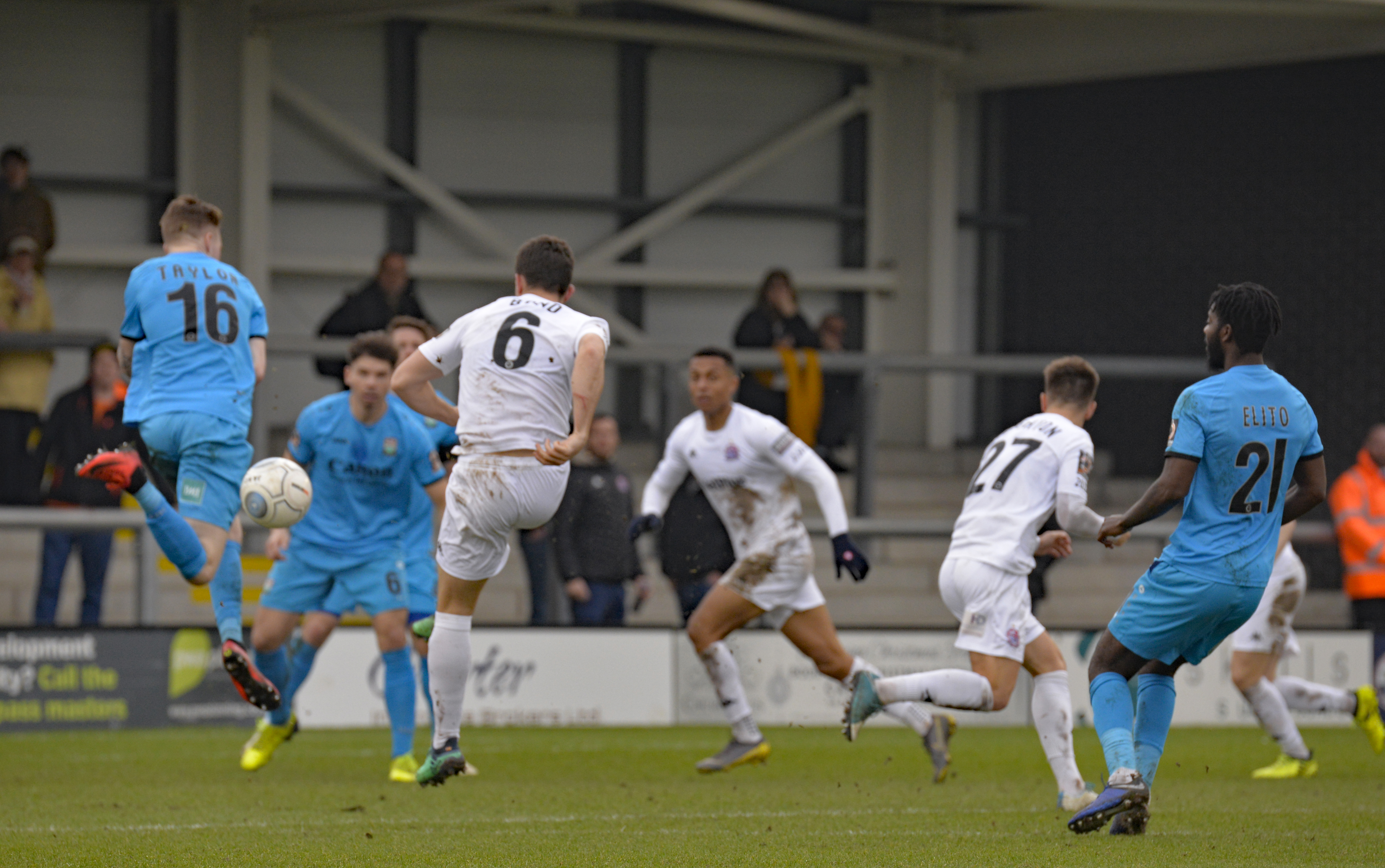 For Barnet, Coulthirst, who had been lively, burst forward into the Coasters penalty area, cutting it back from the byline towards Barham, who was centimetres from turning it home – but it was met by Lynch and wriggled behind.

Both sides continued to try and force a breakthrough, with Elliot Johnson whipping a left-footed free-kick into the box which created a real scramble, with the referee judging that the melee had gone too far, and offering Fylde a much-needed free-kick.

As the full-time whistle beckoned, the Coasters looked more likely to make things happen – with Francis Angol curling an effort just wide with seconds to go.

The full-time whistle eventually came and the sides prepared for an extra thirty minutes.

Once more, the Coasters were quicker out of the traps, with Haughton’s smart one-two with Philliskirk opening up an acre of space inviting Haughton to shoot.

Shoot he did, curling a dangerous shot goalwards, but Cousins was once again equal to it.

Neither The Coasters nor The Bees looked happy to settle for penalties, with both counterattacking at pace.

Haughton’s through ball for Reid was just overhit, forcing the striker wide, with his cross easily dealt with by the Barnet defence.

Barnet’s best opportunity of the afternoon came as Fonguck’s brilliant low cross across the face of goal was met by Akinola, only to be cleared by Jordan Tunnicliffe on the line.

With four minutes to go, Akinola had the chance to win the game, being in the right place as a deflected cross landed in his path. His header, however, missed the goal from inside seven yards from goal, and the Coasters were handed a life-line.

The final effort of the game came from Haughton, after Green’s strength allowed him to find Haughton, with the attacker’s left-footed effort collected by Cousins.

There wasn’t anything to split the teams on the day, however, and the penalty shoot-out began.

With penalty taker Danny Rowe off of the field, Danny Philliskirk stepped up, coolly slotting his home, followed by Haughton, and Bond, who both finished emphatically. Misses from Reynolds and Fonguck for the Bees meant that Alex Reid’s penalty would win it for the Coasters.

He stepped up calmly, having acquitted himself well on the afternoon, before slamming it past Cousins, and sending the Fylde faithful into raptures.

With new territory comes new challenges, as with a double-legged semi-final will come additional fixtures, but it’s one the Coasters are relishing.

“When things go down to penalties it’s always a bit of a lottery,” said manager Dave Challinor.

“It’s always difficult when a game is decided in that matter after the lads have worked their socks off for 120 minutes, but we know the pitfalls of the game.”

“The lads who stepped up really produced fantastic penalties, after we did a bit of work on them yesterday, so it’s fantastic to get through, and we look forward to the draw.”