In one of the most amazing games, you will ever witness, AFC Fylde were held to a dramatic 5-5 draw at Ramsbottom United in the third round of the Buildbase FA Trophy.

Fylde twice ran into two-goal leads, but in both instances were pegged back as their eighth tier opponents forced a replay next Tuesday at Mill Farm.

The Coasters fielded a strong side with Danny Rowe, Nick Haughton and Andy Bond all starting and the lively Haughton caused the Rams trouble early on.

Fylde took the lead after 10 minutes as a low cross from the left was converted past Sam Ashton by Serhat Tasdemir.

Fylde doubled their lead and it was Haughton that proved the difference again. 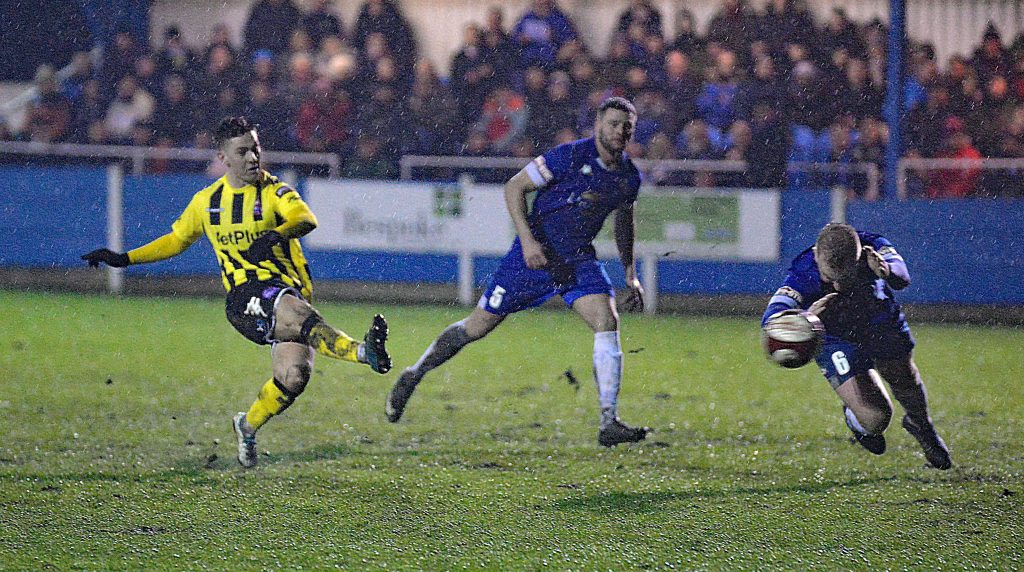 His quick feet saw him glide past three Ramsbottom defenders before curling the ball into the bottom right corner from the edge of the box.

The hosts responded and a crazy three-minute spell saw them draw level. Close range strikes from Luke Thompson and Nic Evangelinos shellshocked the Coasters but there was to be a fifth goal before the break.

A superb cross from the right from Timi Odusina was headed home by Jordan Tunniciffe, beating Ashton to the ball and guiding the ball into the back of the net from 10 yards.

Sixty seconds after the break Fylde doubled their lead for the second time.

Some poor defending from the hosts allowed Tasdemir to steal possession and stroke the ball home into an empty net.

Ramsbottom weren’t finished though and it was Evangelinos once again who struck.

A long ball over the defence was pounced on by the forward who rounded keeper Russ Griffiths and slid the ball home just before Neil Byrne could cover.

A ball over the top found Ellison who dragged the ball back to substitute Ruben Jerome who somehow slid the ball through Griffiths to the delight of the partisan home crowd.

Ramsbottom against all odds took the lead with seven minutes to go and Evangelinos completed his hat-trick.

The ball was played into the box and before Neill Byrne could clear Evangelinos slid in and poked the ball home from four yards out to send everyone at Ramsbottom into ecstasy.

The scoring was not completed yet though as Fylde this time came from behind to salvage a replay. A low cross from the left was sliced into the path of Bond who fired home from close range at the back post to the relief of manager Dave Challinor and his side.

Five minutes of injury time eventually came to an end and the referee’s whistle brought a pulsating classic cup tie to an end.

Both sides will have it all to do again at Mill Farm next Tuesday 12th February, for the chance to play either Carshalton Athletic or Barnet at home in the Quarter Finals.