Leyton Orient pulled away at the top of the Vanarama National League, after a convincing 2-0 home win against AFC Fylde.

For the hosts, James Brophy replaced Matt Harrold, who missed out through suspension whilst James Dayton and Jay Simpson earned spaces on the bench.

The Coasters, who had adopted a slightly unfamiliar 343 formation, made two changes, with Walters and Odusina replacing Birch and Haughton, who was carrying a knock.

This meant that Fylde lined up with Odusina in the back three, with Francis -Angol and Walters provident the width.

Leyton Orient started the game full of confidence and had the first sight of goal when Jordan Tunnicliffe handled the ball on the edge of his area.

Orient skipper McAnuff stood up to take the free-kick, but sent the ball over the bar, much to the relief of Jay Lynch.

The first gilt-edged chance fell to the Coasters on five minutes, when Alex Reid chased a long ball, and was met by the onrushing Orient ‘keeper Brill.

A mix-up ensued which saw Hardy gifted the ball 20 yards from goal, with a now-vacant goal in front of him.

His measured effort was deflected narrowly wide by Happe, denying the Coasters the opening goal of the game.

At the other end, Josh Koroma was making his presence known, dancing into the box and claiming a penalty after being felled, but on this occasion, it wasn’t given.

Fylde earned themselves a few corners thanks to Francis-Angol’s energy down the left-hand side, but they couldn’t make them count.

The closest effort saw Francis-Angol send an angled cross into Neill Byrne, but he steered his header wide of the goal.

Leyton Orient, however, did make their corners count, and opened the scoring after 15 minutes, when Marvin Ekpiteta rose to nod it goalwards, only for it to deflect past Jay Lynch off of Danny Rowe.

Whilst the Coasters looked to get behind Orient through combinations of Hardy, Rowe and Walters, they couldn’t find a way through, and were made to pay.

The O’s second penalty shout of the evening was a much more convincing one, as Brophy nipped passed Neill Byrne, and was bought down.

The referee pointed to the spot, and Macauley Bonne stepped up, striking the ball expertly into the bottom left-hand corner beyond the outstretched Lynch.

Eventually, this did seem to wake the Coasters up, who enjoyed long spells of possession, but on a couple of occasions Danny Rowe couldn’t get his shot away, and at half-time, Fylde trailed by two goals to none. 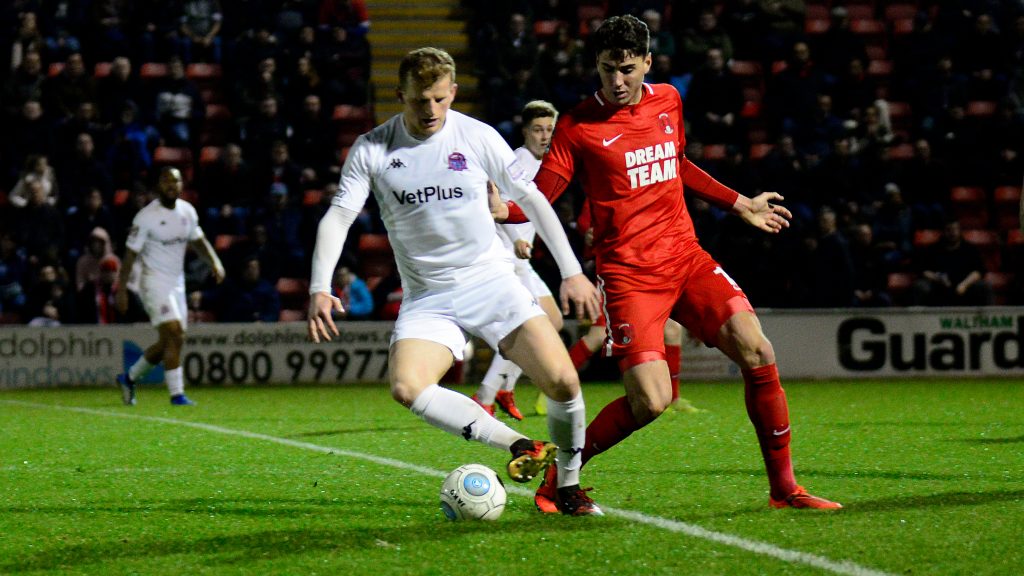 The scoreline prompted a double substitution and change of system, with Haughton and Hemmings replacing Odusina and Reid, with the Coasters reverting to a 433.

Hemmings looked to make himself an instant nuisance on the right-hand side, firing over after driving at goal.

Haughton looked to bring the energy of Hemmings into play with long searching balls, but the O’s defence were fantastic in snuffing out chances.

The O’s picked up plenty of set-pieces, and almost made a third one count, when the ball fell to Coulson, but his low effort flew just wide of the post.

Whilst Orient continued to pose a threat with the pace of Bonne and Koroma, the Coasters had to work hard to forge openings.

Perhaps the clearest cut chance of the night came when Hardy found Walters with a through ball, with the forward firing low at Brill from an acute angle, only for it to be palmed well to safety.

Orient’s next big chance as Clay’s delivery found Dayton at the back post, only for his header to be superbly stopped by Jay Lynch, who had to be alert on his line.

Dan Bradley was introduced for James Hardy, and almost found himself halving the deficit as he sprinted onto a fantastic whipped cross from Hemmings.

The header, however, was just glanced beyond Brill’s post, much to Bradley’s frustration.

Tempers did eventually flare between the two sides, as Bradley and Clay had an altercation which saw both teams coming together on the half-way line.

After much deliberation bookings were handed out to Tunnicliffe, Bradley and Clay, on a night where the referee certainly wasn’t shy to introduce his yellow card to proceedings.

No fewer than eight yellow cards were given on the night, five of which were for the Coasters, who had begun the night with the second-best disciplinary record in the league.

There were moments for Bradley, Haughton and Rowe in the closing exchanges to find the net, most notably from Haughton’s 25-yard dipping effort, but it was to no avail.

The whistle came, and Orient extended their lead at the top to two points, nine beyond the Coasters, following an impressive display at the Beyer Group Stadium.