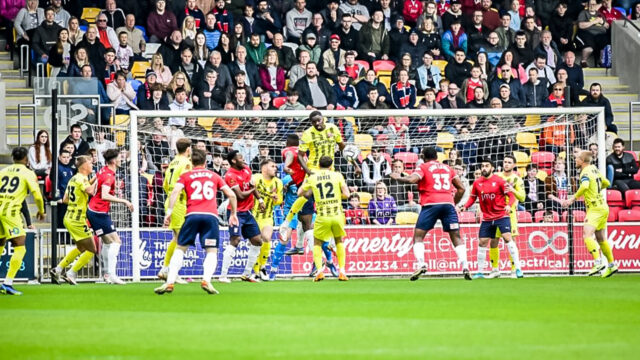 The Coasters claimed third spot in the National League North this afternoon despite a 2-1 defeat against York City at the LNER Community Stadium.

Lenell John-Lewis had the hosts ahead when he nodded in Maz Kouhyar’s cross 10 minutes before the interval.

Ben Tollitt looked to have sparked a potential comeback after he struck sweetly from the edge of the area, but Mitch Hancox put York back in front minutes later, converting from a wide-angle into the far corner.

James Rowe made 10 changes to the side that drew 0-0 with Kettering Town on Saturday, with the likes of Ben Tollitt, Luke Joyce, David Perkins and Jamie Stott coming back into the side.

Harvey Gregson made his full debut for the Coasters, whilst Nick Haughton, Danny Philliskirk and Douglas Taylor started on the bench.

An even start to the game was to see both sides have an early chance on goal. First, Lenell John-Lewis looked to get inside of Emeka Obi to shoot goalwards, though Bobby Jones held well.

That was before Ben Tollitt won the ball back in the final third to set Nathan Shaw free. He cut in on his right foot and fed Stephen Dobbie, who dropped a shoulder and almost found the bottom corner from the edge of the area.

York City came again, though, when a free-kick whipped into the area allowed Akil Wright to rise highest and loop a header over Jones and onto the roof of the net.

A quiet spell in the game brought a little spring to both sides’ steps when Mitch Hancox whipped a dangerous ball into the area, which wasn’t dealt with by Obi, and John-Lewis rippled the side netting.

Minutes later, a carbon copy from Tollitt down the other end was inches away from being turned past Pete Jameson by Jorome Slew.

However, the Coasters were to fall behind when Maz Kouhyar’s left-footed cross was nodded in by John-Lewis at the back post to give the home side the lead.

Kouhyar was slowly growing into the game, and he had the chance to double the Minstermen’s lead when cutting in on his left foot and striking over the bar from 25 yards out.

No chances were to come so far in the half until Rowe made three changes all in one go, and the Coasters were purring.

Some good possession in the middle third allowed the ball to travel to Tollitt’s left boot, and once it arrived, the midfielder cut inside and found the bottom right corner from just outside the area.

Against the run of play, however, York took the lead when Hancox burst through the Coasters defence and saw his strike on goal skid past Jones and into the net.

Tollitt almost drew the Coasters level in the dying embers of the game when he found himself with a free run on goal, but Pete Jameson, on the stretch, denied him from close range.