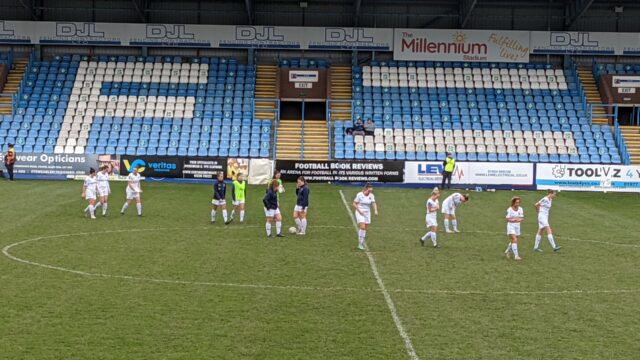 On Sunday 14th November, the Coasters secured a 4-1 win against Wakefield Trinity Ladies FC in the First Round Proper of the Vitality Women’s FA Cup. Playing at Wakefield’s Millennium Stadium, Fylde showed great determination to overcome their West Yorkshire opponents and advance to the Second Round of the FA Cup.

Following a 2-1 victory away to Durham Cestria in the FAWNL Cup, Fylde were back in cup competition when they visited a Wakefield side that usually competes in the North East Regional Women’s Football League.

Fylde joint managers Kim Turner and Danielle Young made several changes to the starting eleven as Megan Hunter started in goal, while Laura Merrin and Jess Holbrook returned in midfield.

After both teams observed a minute’s silence and paid their respects on Remembrance Sunday, the game got underway. The Coasters attacked with intent right from the outset. Minutes into the tie, Amy Hughes drilled an early effort at goal that Wakefield keeper Chelsea Pilmer saved well.

Pilmer was called into action soon after when Jodie Redgrave powered a low shot that Pilmer repelled with her feet. At the other end, Wakefield’s Olivia Whitehead lofted a right-footed shot that Fylde keeper Hunter gathered well.

The Coasters created another good chance when Holbrook controlled the ball on the bounce and fired at goal, but Pilmer got down low to palm the ball away.

Much like their recent goal at home to Brighouse Town, the Coasters opened the scoring directly from a corner kick swung into the box by Laura Merrin. The Wakefield defence struggled to deal with the delivery, and the ball went in off the unfortunate Pilmer to give Fylde the lead.

In the 19th minute, Fylde doubled their advantage when Hughes found space down the channel and crossed to Jodie Mortimer, who made no mistake with a powerful finish. It was no less than the visitors deserved after an explosive start to the game.

In the 25th minute, the hosts almost struck back when forward Neve Renwick found a yard of space and curled a shot just wide of Hunter’s goal. The visitors continued to threaten with long-range efforts by Merrin and Hughes that missed the target.

On the cusp of half time, Faye McCoy got on the scoresheet by turning home Hannah Forster’s pinpoint cross to send the Coasters into the break with a three-goal lead.

The Coasters started the second half by introducing Emily Hollinshead and Sasha Rowe into the attack. Only two minutes after the restart, Wakefield grabbed a goal back when Charlie Blythe played in Renwick, who slotted the ball past Hunter to give the hosts a lifeline.

Buoyed by the goal, Wakefield created another chance when Emily Heckler worked a shot on goal, but her effort flew narrowly wide.

For the visitors, Hollinshead made a number of attacking forays into the box that caused Wakefield all sorts of problems. In the 71st minute, Hollinshead came close to extending Fylde’s lead with a powerful shot that Pilmer got down well to keep out.

The Coasters moved the ball around effectively with some neat passing in the middle, restricting the hosts to few opportunities in the closing stages.

Deep into stoppage time, substitute Kaya Pottinger dribbled past a defender and was tripped in the box. McCoy confidently stepped up to take the resulting penalty and sent Pilmer the wrong way to seal the victory. In doing so, Fylde booked their place in the next round of the Women’s FA Cup.

Next up, Fylde make another trip to West Yorkshire on Wednesday 17th November when they face Huddersfield Town AFC Women. This midweek FAWNL Northern Premier fixture kicks off at 7.45 pm at the Stafflex Arena.

Meanwhile, Fylde have also been drawn at home to Burnley FC Women in the Second Round of the Vitality Women’s FA Cup, which will take place on Sunday 28th November at Kellamergh Park.