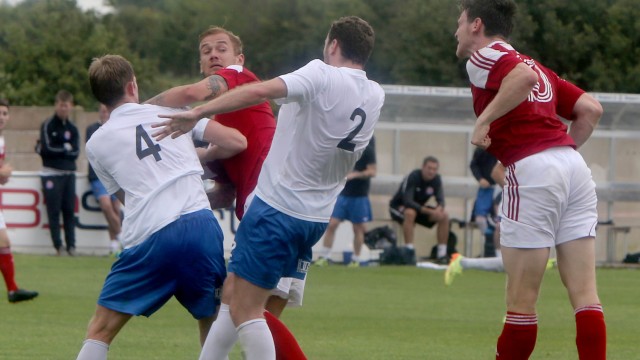 AFC Fylde rounded off their home pre-season friendlies with an impressive win over Bolton Wanderers’ Development Squad on Tuesday night.

Danny Lloyd grabbed the only goal of the game when he connected with Luke Denson’s low cross with 14 minutes remaining to round off dominant second half display from The Coasters which saw no less than eight chances slip away inside the first 15 minutes.

Michael Barnes was back in the starting 11 following his honeymoon and the line up Dave Challinor named could be very close to what his starting 11 could be in just over a week’s time when Brackley Town visit in the first game of the season.

Barnes was sending some excellent crosses into the area early on but each one was just too high for Matt Blinkhorn and Richie Allen waiting in the middle of the area.

The visitors began to get into their stride soon after with Tom Youngs and Zac Clough causing problems at the back for Fylde.

The best chance of the half came three minutes before the break as Mike Potts knocked a high ball towards triallist Richard Baker on the edge of the box and his shot on the turn had Harry Campbell at full stretch to palm it away.

Bolton seemed to have stayed in the dressing room at half time as they failed to deal with a Fylde side that controlled the play superbly.

Lloyd was introduced as a half time sub for Allen and he was doing plenty of running down the left and providing some searching crosses for Blinkhorn to try and chase as well as firing wide himself on 54 minutes.

Potts then saw an effort saved before Denson sent a decent free kick just over the bar from 25 yards on the hour.

Denson came even closer to scoring from the dead ball on 74 minutes but Campbell managed to get a touch and tip his free kick onto the top of the cross bar and over but two minutes later Fylde finally had the lead.

Lloyd will claim he got the final touch to Denson’s low cross despite Liam Fontaine being in close proximity trying to slide tackle the ball away, but whoever got the touch managed to wrong-foot Campbell and the ball found its way over the line.

Fellow substitute Dion Charles saw a couple of efforts go agonisingly wide late on before Bolton missed a couple of decent half chances to salvage a draw.

Challinor was delighted with the performance his side put in saying: “I thought it was a really good work out and we were a lot better and it was pleasing, not only in the result, but the performance more than anything against a good side.

“They had some good young lads in their side and we had to be switched on and we had to defend well but on the flip side we created chances and probably should have stuck a couple more of them away.

“But on the whole it was a positive display and a big step up from where we were on Saturday against Curzon Ashton.”

Fylde now make a short trip to Bamber Bridge for their final summer fixture on Saturday.  Kick-off is at 3pm.