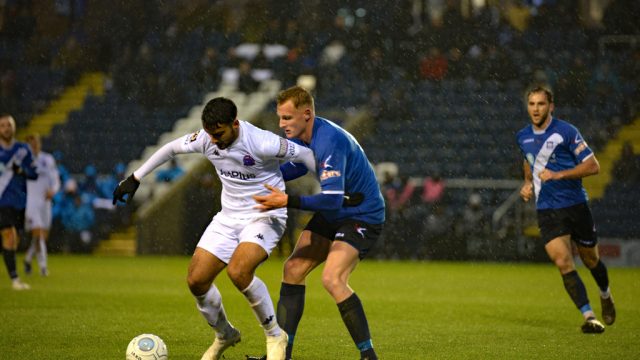 It was definitely a winter’s tale as AFC Fylde made it through to the Second Round of the Buildbase FA Trophy.

The Coasters ran out comfortable 5-1 winners against Stratford Town at Mill Farm on an afternoon where adverse weather conditions wreaked havoc in the north-west.

The 491 fans in attendance did not have to wait long for the opening goal of the afternoon when a routine collection for Town keeper Etheridge turned into a horror show.

Etheridge dropped the ball into the path of Tasdemir, who played a one-two with Haughton, before finishing smartly into the bottom right corner.

Etheridge’s day then got worse, as he was unable to hold Danny Rowe’s powerful free-kick, and Danny Williams was on hand to slot the hosts into a two-goal lead inside twenty minutes.

It was a strong AFC Fylde team, with talisman Rowe starting along with playmaker Haughton in the front three.

The two combined just before the interval, as Rowe was slid through one-one-one, keeping his composure to make the score 3-0.

The second half certainly did change with the wind, as the game was restricted to much fewer chances.

Stratford continued to push and won themselves a string of corners, however, the howling wind wrote off any chance of these causing an impact.

Eventually Fylde found a fourth, as Tasdemir’s tidy control saw him wriggle free and curl his second in with six minutes to go.

The Coasters had the ball in the back of the net for a fifth time five minutes later, but Andy Bond’s rebounded effort was judged to be from an offside position.

Despite the scoreline Stratford kept going and in the second minute of added time, they did net a consolation, as defender Williams finished with a low shot after the ball was played back in the box.

The game looked all but over with this – until Danny Williams drilled one in from the edge of the box with moments to go, capping off a good afternoon for the on-loan Accrington Stanley man.