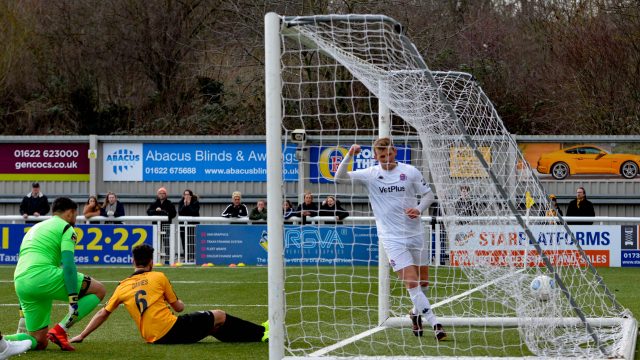 BUOYED by back to back league wins against promotion rivals Wrexham and Solihull Moors, AFC Fylde looked to keep their season on target with a win at The Gallagher Stadium.

Maidstone’s aim remained an altogether different one, as veteran John Still looked to steady the ship and keep the Stones afloat in the Vanarama National League.

Fylde remained unchanged in the league, with Bradley and Hemmings returning from cup-tied status for Manager Dave Challinor to name the XI that faced Solihull Moors.

It was a dominant first half-showing from The Coasters, with Philliskirk firing an early chance wide for the Coasters, as Haughton’s deflected cross fell to him on the edge of the box inside a minute.

Chances continued to materialise, as Hemmings’ smart movement found him with a half-chance outside of the area, but his curled effort looped harmlessly over the bar.

The hosts rallied briefly, as a searching cross from the right-hand side forced central defender Jordan Tunnicliffe into an important headed clearance.

The back four looked to play with confidence on the 3G surface, conditions a million miles away from Ramsbottom United on Tuesday evening.

The pacey Timi Odusina beat his man on the right and to get a cross into the box, but it just evaded everyone, including the onrushing Danny Rowe.

Rowe was then found, as Philliskirk’s search ball found him darting in from the corner of the box, but Henry was quickly off of his line to snuff it out.

A massive chance fell to Hemmings in a near replica of his previous effort, but his low shot from 20 yards just crept wide of Henry’s post.

The pressure was on, and Dan Bradley took charge, looking the most likely to make something happen.

His dipping effort from distance almost caught Henry out, but the keeper managed to get a hand to it, and tipped it crashing back off of the bar.

This was only offered a small respite, however, as Bradley’s enthusiasm saw him force the opener.

Bradley’s cross was sent into the box after a good through ball from Hemmings, and defender Aron Davies sent it into his own net, after getting his clearance all wrong.

Fylde’s celebrations were cut short, after a flag on the side indicated it was offside – however, referee Carl Brook overruled his assistant, and the goal stood. 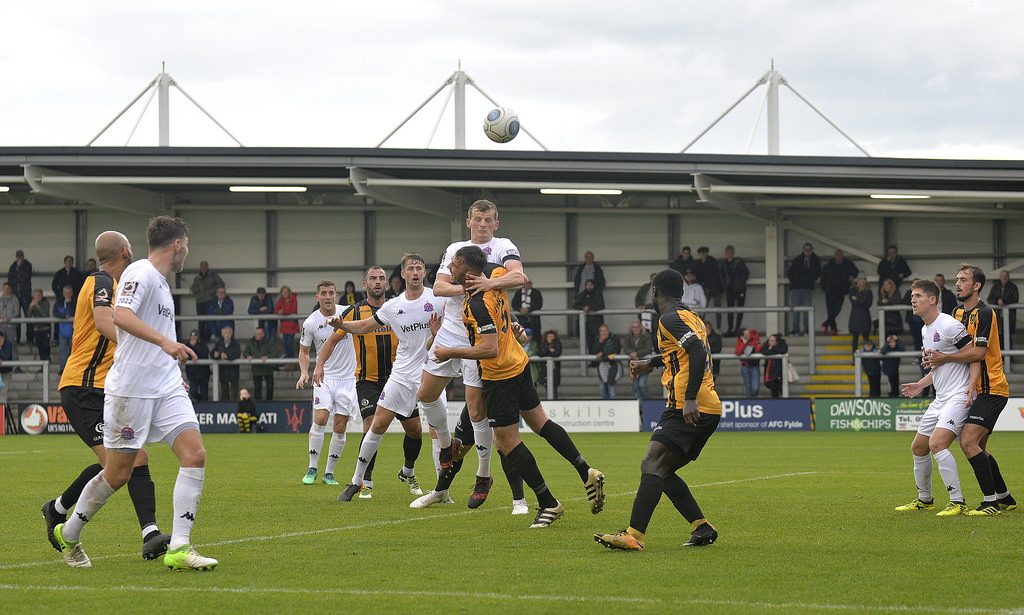 Coasters started strong once again, with Odusina cutting the ball in cleverly to Rowe, whose effort rebounded into the path of Philliskirk.

Philliskirk sent a powerful low volley goalwards, which Henry did well to palm away.

This prompted a change for Maidstone, as striker Jake Robinson replaced defender Dan Meredith, with a more attacking shift in formation.

Immediately afterwards, it could have been two for the visitors, as Haughton’s whipped cross deflected onto the toe of Dany Rowe – but the chance seemed to take him by surprise, and the prolific striker put it wide.

Despite another positive start from the Coasters, Maidstone found themselves level on the hour mark, as Tunnicliffe’s intercepted pass set up a Maidstone attack.

Wishart powered past Hemmings onto the ball, before playing in Jake Robinson on the left wing.

Jake Robinson’s cross-cum-shot was probably veering wide, but Philliskirk’s attempts to prevent it ended up turning it goalwards. 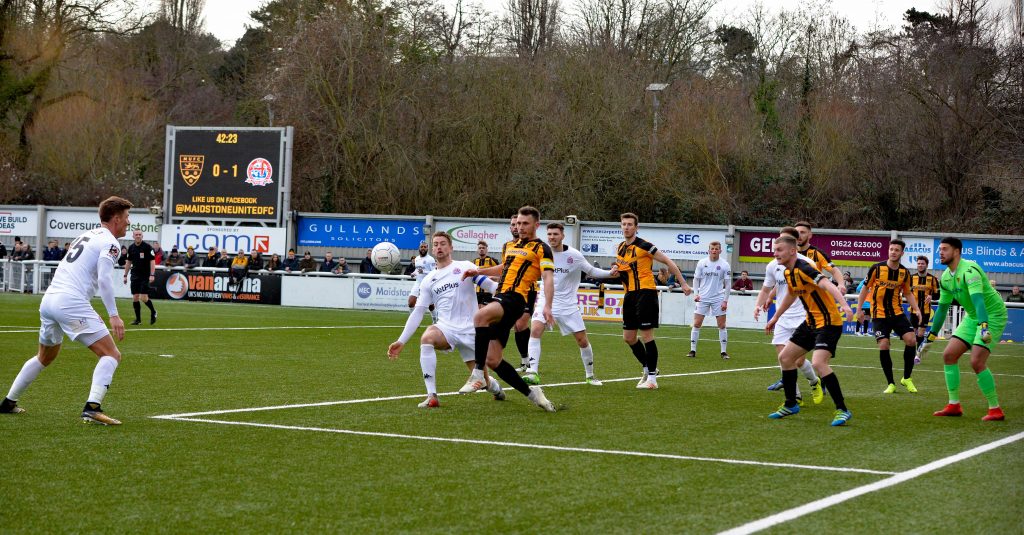 The Coasters responded by introducing Lewis Walters in place of Nick Haughton, almost immediately galvanising the side.

Maidstone, however, looked a different beast, and with the home crowd behind them looked to grow in confidence.

The home side almost took the lead, and if not for the heroics of stopper Jay Lynch would have done so.

Ollie Muldoon’s perfectly delivered free-kick was met by the rising Robinson, whose header was goalbound – only for goalkeeper Lynch to pull off a spectacular diving save to deny him.

Debutants Lewis Walters and Alex Reid provided different outlets for the Coasters, with the latter showing promising signs of link-up play with Danny Rowe, however, none came to fruition.

The match came to a close, and the Coasters earned a point at a ground they lost at last year – but Dave Challinor couldn’t hide his disappointment.

“We’re disappointed in the fact that we’ve played an awful lot worse than that this season and won,” said Dave Challinor after the game.

“I think it highlights how fine the margins are between winning and losing, and where you can get in the table.”

“Ultimately today we haven’t got what we’ve deserved, but that’s to take nothing away from Maidstone.”

Watch the full interview below.