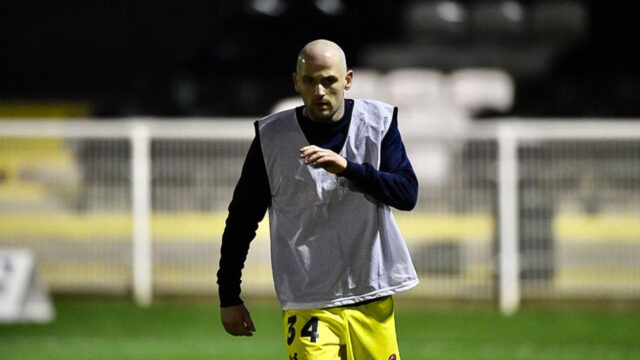 In a night under the lights at Brewery Field, the Coasters left with all three points after a Will Hatfield debut goal continued James Rowe’s unbeaten start to life at AFC Fylde.

Hatfield’s goal turned out to be the deciding factor in the clash when he managed to get on the end of Tom Walker’s fizzing cross into the area to wrongfoot Amissah in the Moor’s goal.

James Rowe made two changes to the side that grabbed an impressive three points over Alfreton Town, with new signing Hatfield coming in to replace Nick Haughton. Sam Osborne also returned on the bench.

A few early chances for both sides first saw Hatfield have a half volley blocked on its way to goal from the edge of the area before Glen Taylor found himself free in the area but struck down the throat of Chris Neal.

Despite Luke Spokes then forcing Neal into a stretching fingertip save to stop his effort from nestling into the top corner, Jorome Slew almost skidded one underneath Jordan Amissah, though he stopped smartly with his right boot.

The chances started to dry up towards the end of the half – however, Taylor managed to work some space for himself inside the area, only to drag his left-footed shot wide of Neal’s post on the stroke of half-time.

It was Rowe’s side that had the best chances of the second 45 early on. First, Conlan had a volley gathered with ease by Amissah before substitute Stephen Dobbie was gifted a golden opportunity by the Spennymoor ‘keeper.

Amissah played the ball into the Scotsman’s path after receiving a back pass, but Dobbie couldn’t react quick enough and saw the ball float over the bar.

However, the Coasters weren’t going to let that affect them, and they found the opener moments later when Tom Walker’s dangerous cross allowed Hatfield to stick a leg out, fool Amissah and divert into the back of the net.

Hoping to see the game out, substitute Sam Osborne found space to round the scoring off, but just as he was about to unleash a shot, the ball bounced away from him to run on through to Amissah.