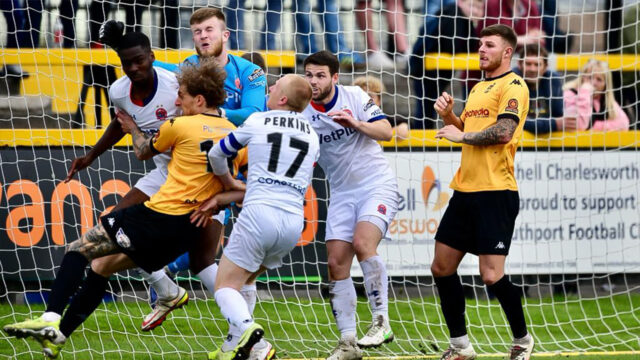 After an eventful first half, a ten-man Fylde battled to earn a point at Haig Avenue in the National League North.

The main talking point in the game was Will Hatfield’s red card for an off the ball incident, and despite Fylde having chances through Nick Haughton and Obi, the points were shared.

The most action of the game so far came after 20 minutes when Connor Woods first tested Bobby Jones with a free-kick from 25 yards out before Nick Haughton turned his man in the area and skimmed the back of the bar.

However, despite little chances on goal, the game flared up when the referee was alerted to an offence by his assistant after members of the Southport bench raced down the touchline to the linesman.

After five minutes of deliberation, the referee brandished a red card in the direction of Will Hatfield, and the Coasters ended the half with 10 men.

Despite entering the second half with a man less, Fylde were hoping to take the lead early on through Haughton when he attempted to lift the ball over Mason from the halfway line but saw the effort go wide.

Substitute Niall Mason first had an opportunity for Southport but blasted over from distance before a corner into the area from Luke Joyce was met by Obi, though he could only find the hands of Mason.

Hoping to make the advantage count and applying pressure in the closing stages, Southport almost snatched a winner through substitute Josh Hmami when he fizzed a free-kick at goal, though numerous Coasters shirts flung themselves in front of Jones to deny him.

Fylde, though, managed to battle on and earn themselves a point with very few chances created throughout the game from either side.