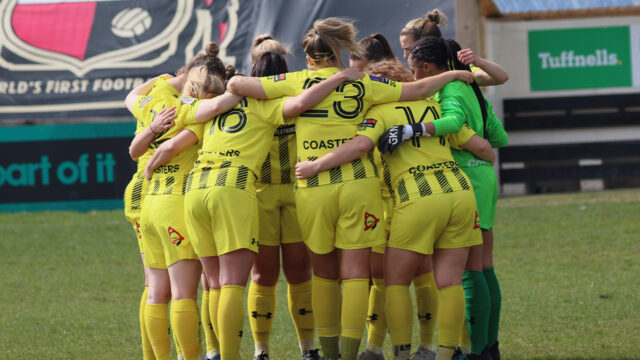 On Easter Sunday, AFC Fylde Women ran out 2-0 winners against Sheffield FC Women in the FAWNL Northern Premier Division to maintain third place in the table.

Goals either side of half-time from Sasha Rowe and Mel Bartley earned the Coasters all three points in their penultimate game of the season.

Kim Turner and Danielle Young’s team travelled to the Home of Football Stadium in Dronfield on the back of an impressive 2-1 victory over Stoke City Women last time out.

In their two previous meetings earlier this season, the Coasters had got the better of the Sheffielders on both occasions last October, beginning with a 5-2 away win in the FAWNL Cup, followed by a 4-1 home win in the league several weeks later.

Fylde made two changes to the starting eleven, with Sasha Rowe starting in midfield and striker Mel Bartley leading the line alongside Faye McCoy.

The Coasters raced out of the traps and nearly broke the deadlock within the first few minutes. After winning a free-kick on the edge of the area, McCoy struck a ferocious shot against the crossbar before the Sheffield defence scrambled away the rebound.

Taking aim from a similar distance minutes later, McCoy fired another free-kick towards the bottom corner, but Sheffield keeper Abi Megeary made a smart save down to her left.

In the 8th minute, Sasha Rowe produced a moment of brilliance to open the scoring for the visitors. Receiving the ball on the left, she drifted inside and unleashed an unstoppable strike past Megeary to put the Coasters 1-0 up in spectacular style.

Driving forward on the right, Hannah Fryer then delivered an inviting cross for Faye McCoy to head on target, but her effort was held by Megeary.

McCoy then turned provider when her cross from the left almost found Bartley in the box, but the ball evaded her.

The Coasters posed a real aerial threat with headed attempts from Bartley and McCoy testing Megeary in the closing stages of the first half, but Rowe’s solitary goal proved to be the difference between the sides at the break.

In the second half, the Coasters continued to press for another goal. McCoy stung the palms of Megeary once again before Jodie Redgrave tried her luck from distance, but her effort failed to trouble Megeary.

On the hour mark, the Coasters were forced into a change when defender Olivia Fuller went down injured and had to be replaced by Laura Merrin.

In the 69th minute, Merrin then played a key part in Fylde’s second goal of the afternoon – this time from a well-worked set-piece. Merrin’s floated corner kick picked out Jenna Carroll at the back post, who nodded back across goal for Bartley to head into the bottom corner.

Fylde continued to look dangerous in attack. After Jess Holbrook headed narrowly wide from Merrin’s centre, McCoy then came close to adding a third with a powerful strike, but Megeary was on hand to make another excellent save. The Coasters saw the game out strongly to secure another impressive win on the road.

Next up, the Coasters travel to Loughborough Lightning on Sunday 24th April for their final game of the season. This fixture will be played at Loughborough University Stadium, with kick-off at 2.00 pm.