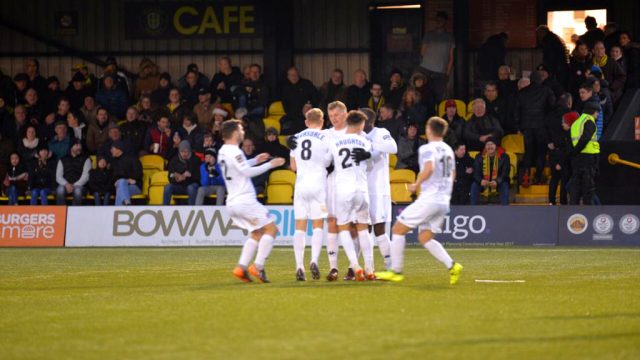 A double from Danny Rowe sealed three points for AFC Fylde, on a dramatic afternoon at Harrogate Town.

Rowe’s winner came from the penalty spot in injury time after substitute Serhat Tasdemir’s electric pace saw him brought down in the box.

The Coasters were forced into one change for the 5th v 6th clash in Yorkshire, as captain Lewis Montrose “wasn’t going to be risked” by manager Dave Challinor.

With skipper Lewis Montrose not featuring today, Chally talks us though the reasoning – and the squad named today. #BornToBeFylde pic.twitter.com/cHMLukYUVB

This was following a slight pain in his left foot that had caused his lengthy set-back from pre-season, but a wise one given the work the captain has done to make it back to fitness.

Kevin Langmead returned in defence for the hosts, taking the place of Ryan Fallowfield.

The hosts started the stronger of the two sides, finding their first sight of goal inside 5 minutes, when Kitching went close with a low effort from the edge of the box.

The pressure mounted and Town were almost rewarded when a fantastic ball was curled in by Knowles across the face of goal, but Kevin Langmead’s header managed to miss the target from inside 6 yards.

Harrogate went even closer to breaking the deadlock just before the half-hour mark, when AFC Fylde defender Neill Byrne’s miscued clearance went crashing off of his own goalframe, after Joe Leesley’s searching cross caused panic.

This was a wake-up call for the Coasters however, and things soon started to click.

A wonderful free-flowing move involving four players opened Harrogate up, finding Andy Bond out wide. Bond’s low cross found Danny Rowe ten yards from goal, but his strike was just too powerful, and his effort cannoned off of the bar.

With growing confidence on the ball, the Coasters went into half-time with the belief that they could win the game – and it didn’t take long in the second half for it to become a reality.

Francis-Angol was fouled 30 yards from goal after a quick restart to the second half. The ball was placed down by Danny Rowe with only one thing in mind, and the Coasters fans held their breath.

His free-kick was struck sweetly, swerving left beyond the scrambling Belshaw, and into the net to give the Coasters the lead.

In typical Danny Rowe fashion, there wasn’t much in the way of celebrations. You’d be forgiven for thinking he’d received bonus nectar points on a purchase rather than score the sublime goal he had, but the Coasters’ fans didn’t mind one bit.

This forced Town into rethinking their strategy, and just before the hour was up, former Coasters striker Muldoon, who had been quiet, was replaced by the towering forward Mark Beck.

One counterattack, led by Nick Haughton, had exactly the desired impact. Haughton carried the ball from around the half way line with a mazy run, before eventually being felled, and winning his side a penalty.

This gave the Coasters, and Danny Rowe, the chance to double their tally – but this time Belshaw got his own back on Rowe, guessing the right direction and palming the penalty safely away.

This revitalised Harrogate and the bumper crowd encouraged their side, with their reward coming in the 81st minute.

A cross to the feet of substitute Mark Beck was initially mishit, but he steadied himself to awkwardly fire it home, and bring his side level.

With the game reaching its conclusion, both teams had chances to win it, but it was the introduction of substitute Serhat Tasdemir that proved crucial.

Tasdemir beat the offside trap to unleash a surging run at goal, readying himself to shoot.

However, Burrell’s challenge came just before, catching the forward unfairly, and offering Fylde the chance to win it from the spot.

It was Danny Rowe v James Belshaw once again, this time perhaps more pressuring than ever.

Undeterred from his earlier miss, however, Rowe stepped up and dispatched cooly to Belshaw’s left.

Liam Kitching received two yellow cards for dissent in the ensuing events and was given his marching orders.

In scoring, Rowe earned his side the three points and made himself the leading goalscorer in the Vanarama National League – all whilst nudging the Coasters into third place ahead of Salford City.

“I don’t think we started the game well, we didn’t do the basics and didn’t function as well,” said Manager Dave Challinor.

“After that though I think we improved, and if any team was going to score in the second half it was us.”

“You hope that the penalty miss doesn’t come back to haunt you. It did provide them with momentum, and they got the equaliser, but fortunately we had another opportunity to win the game.”

“It’s been a massively successful year for us, but hopefully we can now start 2019 in the right manner.”

“Our aim as everyone else is to stay up, I think we’ve done that now, so, we’re in the playoffs, and it would be a huge advantage to finish as high as we can.”

Tuesday’s game will be as tough as anything, but one we are all looking forward to.”