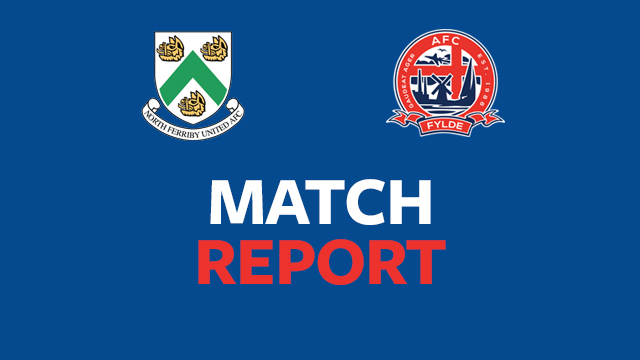 AFC Fylde suffered a blow in their title charge as they crashed to a 3-0 defeat at North Ferriby United.

The Coasters were behind after just two minutes through Ashley Palmer and further goals from Liam King and Tom Denton completed a miserable afternoon for Dave Challinor’s side.

Challinor handed youngster Brad Roscoe his debut less than 24 hours after joining on loan from Fleetwood Town, whilst another new face, Alex Marrow, was on the bench.

The match had barely kicked off and the hosts were already ahead when an early corner was headed into the top corner by Palmer.

The lead was almost doubled on nine minutes, but Danny Clarke’s goal-bound effort struck the foot of the post from 15 yards.

Danny Rowe was the first to have a real opportunity for the Coasters when he twisted and turned before seeing his effort saved.

Ferriby hit the woodwork for the second time on 23 minutes when Denton’s long range effort crashed back off the crossbar.

Fylde hit back with a chance of their own moments later when Matty Hughes beat the offside trap, but his strike was wide of the post.

After a lull in play Fylde sprang to life and were a whisker away from an equaliser on 42 minutes. Hughes was felled a yard outside the box and Josh Wilson curled the resultant freekick against the inside of the post.

The lead was doubled on 51 minutes and it was a nightmare for debutant Roscoe. The defender flew in to a challenge and brought down the Ferriby attacker allowing captain Liam King to slot home the resultant penalty.

Fylde were knocking at the door, but the hosts were standing strong at the back.

The game was becoming a feisty, scrappy affair with neither side creating any chances of note. Ferriby seemed content with their lead and the visitors could not break down their resilient defence.

The game was put to bed with five minutes to play when Denton curled home into the far corner of the net to make it 3-0.