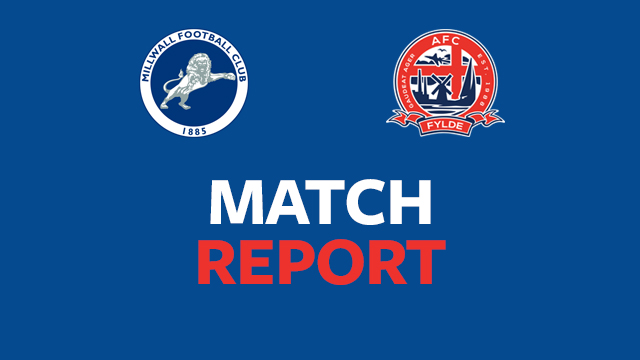 AFC Fylde were cruelly knocked out of the FA Cup at the first round stage despite a spirited display in a 3-1 defeat against League One side Millwall.

Fylde managed to get themselves back into the game with Alex Whittle’s first goal for the Coasters before former Norwich striker Steve Morison secured Millwall’s win a late strike.

Fylde battled hard but they couldn’t force a replay against a side sixty-five places above them.

Millwall dominated the early possession and had a claim for a penalty after eight minutes as Gregory went down under pressure from Dom Collins but referee Stephen Martin waved away the striker’s appeal.

Fylde’s first opportunity came on twelve minutes when Danny Rowe cut inside onto his favoured right foot but his long range effort sailed harmlessly wide of the Millwall goal.

There was a nervy moment for Urwin shortly afterwards as Lee Martin’s bouncing free-kick nearly deceived the ‘keeper but he managed to push the full back’s effort past the post.

It was another free-kick that presented the next big chance, this time to Fylde. Josh Wilson curled his free-kick around the wall, only to find the outside of the net rather than the back of it.

It had become an end-to-end game and Millwall were the next side to go close. Morison’s flicked header was met by a close range effort from Fred Onyedinma but the winger’s header floated wide of the post.

Morison himself should have broken the deadlock after the half hour mark. The striker latched onto Shaun William’s pass and created the chance for himself but thumped his strike wide of Urwin’s far post with the game’s clearest chance so far.

The game then entered a lull with both teams cancelling each other out until, just before half time, Fylde came agonisingly close to opening the scoring. Rowe received a pass from Dion Charles, cut inside his man and beat David Forde in the Millwall goal but his left foot shot trickled inches wide.

The chances kept coming in the second period as Urwin had to be alert to produce a brilliant reflex save to keep out another close-range Onyedinma header.

Fylde’s Football League hosts began to take control and made their dominance count on 54 minutes. O’Brien, a half time substitute for the Lions and League One player of the month, calmly slotted home after a flick on from Morison.

Millwall then doubled their lead six minutes later through a former non-league striker. Gregory, formerly of Halifax Town, muscled his way past Tom Hannigan before slotting a low strike past Urwin.

Just when it looked like Millwall were out of sight, Fylde dragged themselves back into the contest almost immediately. Whittle burst forward from left full back, his initial effort was blocked but he fired his second attempt in off the far post to breathe new life into the Coasters.

Following that frantic ten minutes, Millwall took back the ascendency and Onyedinma had yet another headed opportunity but Urwin denied the midfielder once more, tipping his effort onto the roof of the net.

Urwin was on hand again late on to prevent the Lions extending their lead as he parried a stinging drive from O’Brien over the bar to stop the Irishman from scoring his second of the match.

Millwall scored their third in the eighty-eighth minute to kill off the Coasters and secure their place in Monday’s second round draw. Morison applied a calm finish with the composure of a former Premier League striker and Fylde’s brave resistance was finally broken.

Fylde battled hard in the final few minutes as Rowe’s fierce freekick was kept out by Forde but Millwall held out to progress to the second round.

Dave Challinor’s men can hold their heads up high after a determined performance with plenty of positives to take into their push for promotion this season.