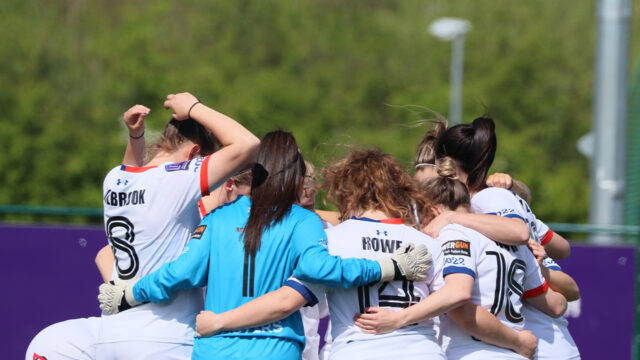 In their final game of the season, AFC Fylde Women suffered a harsh 4-1 defeat away to Loughborough Lightning to conclude an outstanding campaign in the FAWNL Northern Premier Division.

After a goalless first half, the game sprung to life in the second period with two quick-fire goals for Loughborough, followed by a wonder goal back by Emily Hollinshead, only for the hosts to seal the points with two further goals late on.

The margin of the victory did not tell the whole story in what was a strong attacking display by the Coasters, who came up against a well-drilled Loughborough team that put away their chances at key moments in the second half.

Last time out, the Coasters earned a convincing 2-0 win against Sheffield FC Women on Easter Sunday, while the Lightning came into the game on the back of two score draws against Nottingham Forest and Huddersfield Town.

When the sides last met in January, the Coasters ran out 2-0 winners at Kellamergh Park thanks to a brace from Faye McCoy.

Kim Turner and Danielle Young made three changes to the starting line-up. Laura Merrin and Alex Taylor started in defence, while goalkeeper Megan Hunter made her league debut for the Coasters.

In a cagey opening, the Fylde defence had to be alert to the danger posed by the hosts on the counter. Loughborough’s Katie Middleton fashioned an early chance when she cut inside from the right and drilled a shot that Hunter saved well at her near post.

In the 23rd minute, the visitors almost went ahead when Sasha Rowe centred for Merrin, who nodded just over the crossbar.

Loughborough came forward again when Abbie Hateley raced down the right and lashed an effort into the side-netting under excellent defensive pressure from Hannah Fryer.

On the half-hour mark, Merrin delivered a dangerous free-kick towards the back post, where McCoy could only glance a header wide.

Lightning captain Chloe Young nearly opened the scoring when she met Hateley’s corner on the volley, but her strike failed to trouble Hunter in the Fylde goal.

Shortly before the break, Rowe drove forwards and aimed a curling shot towards the top corner, only for Loughborough keeper Kiya Webb to palm the ball away to safety.

Early in the second half, Loughborough were awarded a penalty when Middleton sprinted down the right and darted into the box, before falling under pressure from Merrin. The referee deemed it a foul and pointed to the spot. Chloe Young slotted the penalty into the bottom left corner to give Loughborough the lead in the 48th minute.

Moments later, the hosts threatened once more when Hateley connected with a lofted cross and fired a shot narrowly over the crossbar.

The Coasters came agonisingly close to equalising in the 64th minute when Taylor rifled a long-range shot that cannoned off the inside of the post and out to safety, with Webb rooted to the spot.

In the 72nd minute, substitute Emily Hollinshead’s pinpoint cross found Jodie Redgrave racing in at the front post, but Redgrave’s attempt was blocked on the goalline. From the rebound, Jenna Carroll shot on the turn to draw a fine save from Webb, who somehow managed to tip the ball over the crossbar.

Somewhat against the run of play, Loughborough doubled their advantage in the 78th minute when Rosetta Taylor collected the ball on the edge of the area and arrowed a shot into the bottom left corner. The strike was aided by a slight deflection that took the ball away from Hunter’s reach and into the back of the net.

Five minutes later, Fylde halved the deficit when Hollinshead broke free through the middle and produced a sublime finish into the bottom right corner, leaving Webb with no chance.

However, Loughborough were able to restore their two-goal cushion almost immediately when they were awarded their second penalty of the game, this time for a handball offence given against Alex Taylor.

Hunter pulled off a spectacular save to deny Middleton from the spot, but the referee ordered the penalty to be retaken because Hunter had encroached from her goal line. The retaken penalty was scored by Laura Steele, who this time made no mistake from the spot.

In stoppage time, Loughborough put the gloss on the scoreline with their fourth of the afternoon. As Fylde attempted to play the ball out from the back, Anna Renken intercepted a stray pass and prodded the ball over the line from point-blank range.

With the last action of the contest, substitute Amy Hughes forced keeper Webb into another smart save. Loughborough held on to clinch all three points and preserve their third-tier status for another season.

As for the Coasters, this final-day defeat should not detract from what has been an incredible record-breaking season for Kim Turner and Danielle Young’s side.