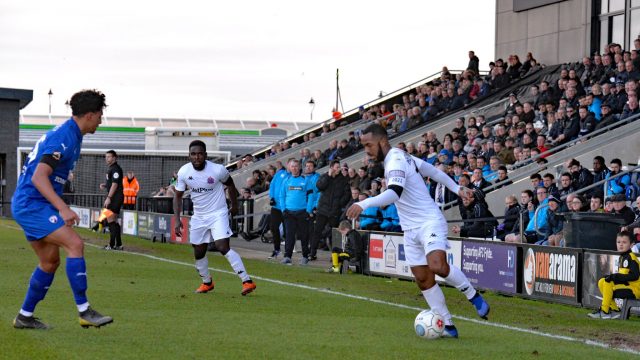 The Coasters succumbed to just their third home defeat of the season, as a rejuvenated Chesterfield side continued their impressive form.

The Coasters were unchanged for a third straight league fixture, on an afternoon that they were looking to make amends for a disappointing draw the week before.

Before the game began, a tribute was paid to legendary goalkeeper Gordon Banks, who passed away in the week.

? Before today’s game, we paid tribute to a legendary goalkeeper who sadly passed away this week.

As a player who began his career with @ChesterfieldFC, their fans’ rendition of “England’s Number One” was a fitting tribute to Gordon Banks.#Legend pic.twitter.com/DztKSU5gr2

The visitors started with high intensity, and were rewarded within the first quarter of an hour, with Marc Antoine Fortune’s 12th-minute strike proving key in earning Chesterfield a priceless victory.

Fortune dribbled past two Fylde defenders before firing into the bottom corner from 15 yards with the ball seeming to bounce in front of goalkeeper Jay Lynch.

The dangerous Danny Rowe looked to test the keeper early on firing just over the bar from 30 yards.

The Coasters grew into the game as the half wore on and Haughton had the chance to even the scores as Croasdale found him in space 25 yards out but his effort was tipped over the bar by Jalal.

Haughton was on a one-man mission as he glided past a number of blue shirts before curling a 20-yard effort which hit the post and bounced back out to Hemmings who skewed the rebound wide.

The visitors had another chance just before the break as Lee Shaw teed up Scott Boden whose curled effort from the edge of the box dragged wide of the far right post.

Haughton again looked to cause problems and he teed up Croasdale to let fly from 25 yards but his effort was always rising over the bar.

Fortune continued to cause the Coasters problems as the back and a low shot from the former West Brom striker went narrowly the wrong side of the near right post.

Dan Bradley was next to try his luck from range but his 20-yard effort was well saved by Jalal at the near left corner. 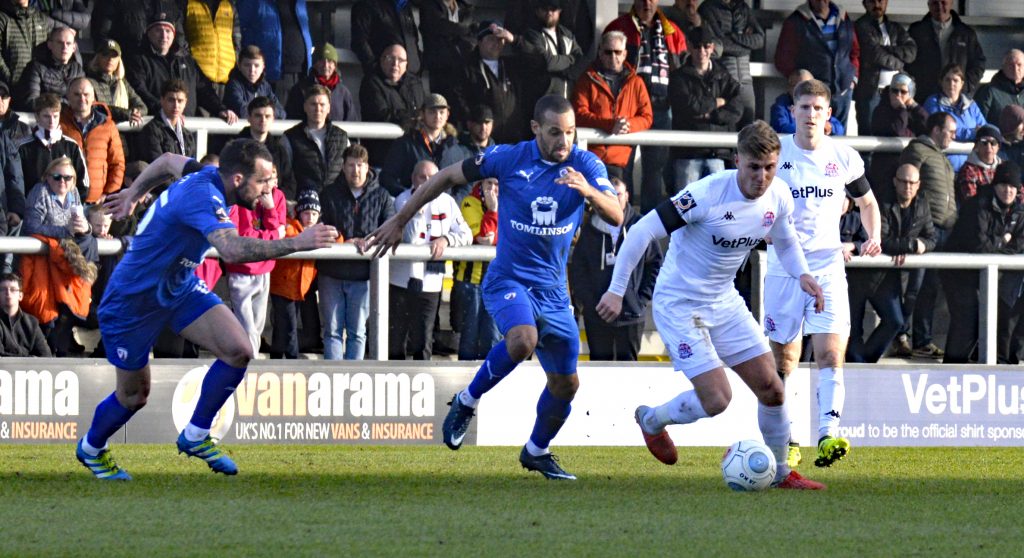 Haughton again caused problems gliding past blue shirts and unleashed a fierce effort from 25 yards but Jalal did well to tip it over the bar.

Fylde then hit the upright once again as Bradley’s cross come shot beat Jalal but came back off the right post and Tasdemir couldn’t get there first to convert from close range. Rowe then fired wide from the edge of the box with a snapshot.

Jalal was in fine form once again to deny Rowe with a terrific save to the near left post.

That was the final chance of the game as Chesterfield survived the late Fylde onslaught to claim a big three points in their battle against relegation, whilst the Coasters failed to take advantage of other teams at the top of the table dropping points.

Fylde Assistant Manager Colin Woodthorpe was in a reflective mood. “It’s frustrating, we’ve huffed and puffed to create chances but it wasn’t our day.”

“These things happen though and we move onto Tuesday”.