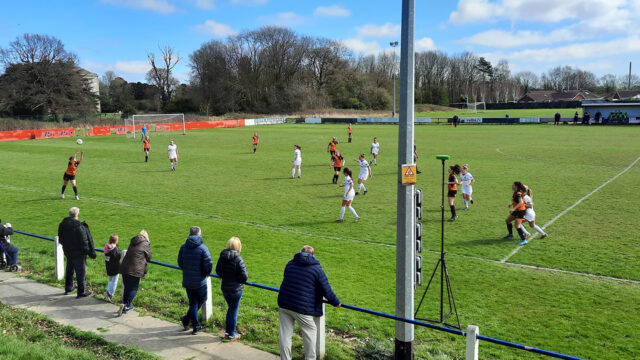 A first-half headed goal by Laura Merrin proved decisive for the Coasters after a battling team performance at Haworth Park.

Fylde travelled to Humberside with the aim of taking home all three points to keep pace with the chasing pack in the table. In the reverse fixture in early September, the Coasters got the better of the Tigresses with a convincing 3-0 win at Kellamergh Park.

Joint managers Kim Turner and Danielle Young made several changes from the starting eleven that earned a 2-2 draw away to West Bromwich Albion Women the previous weekend. Alex Taylor returned to partner Olivia Fuller in centre defence, while Kaya Pottinger started on the right-wing.

The first chance of the game fell to the hosts in the third minute when Helen Lynskey tried her luck from distance and shot narrowly over the crossbar. As they settled into the contest, the Coasters attempted to string some passes together on a dry and uneven surface.

After Jess Holbrook squared the ball to Hannah Forster on the edge of the area, Forster slid the ball through to Emily Hollinshead, who saw a shot on the turn saved by Hull City goalkeeper Abi Wallace.

The Coasters created the next big chance in the 21st minute when Holbrook curled a delightful free-kick into the box that Amy Hughes headed towards the bottom corner, but Wallace reacted well to turn the ball behind for a corner.

On the half-hour mark, Hull City threatened from a free-kick when Katie Thompson floated a cross towards the back post, but Fylde goalkeeper Ellie Etheridge did well to collect the ball under pressure from several Hull City attackers.

After a period of sustained pressure, the Coasters managed to find the breakthrough in the 33rd minute. Kaya Pottinger raced down the right and sent in an inviting cross that Laura Merrin met with a cushioned header into the bottom right corner. Merrin timed her run to perfection and headed past Wallace from close range to give Fylde a deserved lead.

As the first half drew to a close, the Tigresses continued to pose a danger from set-pieces, but the Fylde backline dealt well with the high balls into the box.

At the start of the second half, the hosts came close to an equaliser when forward Rachael Ackroyd raced through the middle and fired a shot at goal, but Etheridge pulled off a smart save to deny her.

As the second period wore on, the contest very much became a battle for possession in the middle of the park. The introduction of Sasha Rowe and Jodie Redgrave just past the hour mark helped to stabilise the Fylde midfield, as both teams struggled to create any openings.

The Coasters remained organised and compact in defence, restricting Hull City’s ability to get in behind. After being awarded a free-kick some 40 yards out, Amy Pollock saw her speculative effort sail over the crossbar in the 80th minute.

In the closing stages, Fylde defended resolutely to see out the result and keep another clean sheet on the road. The victory consolidated the Coasters’ position in third place in the league ahead of two home games in the coming week.

Next up, the Coasters welcome Huddersfield Town Women FC to Mill Farm on Wednesday 30th March, with kick-off at 7.45 pm. It promises to be a special occasion under the floodlights at Mill Farm.