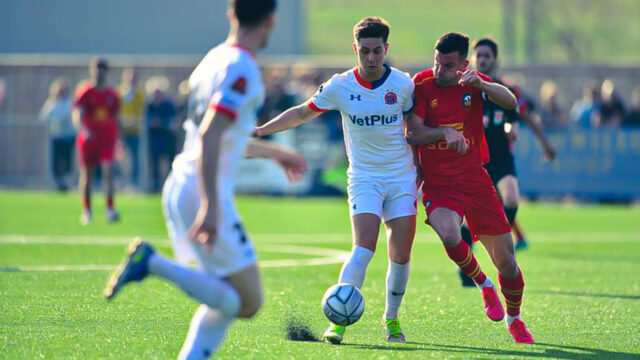 The Coasters suffered their first defeat under manager James Rowe with a 1-0 defeat against Gloucester City in the National League North.

Lucas Tomlinson’s fourth-minute goal from close range was enough to see City over the line and secure three points at the Tiger Turf stadium despite several second-half Coasters attempts.

James Rowe made one change to the team that beat Spennymoor Town on Tuesday night, with Nick Haughton coming in to replace Ben Tollitt. There was also a place on the bench for new signing Douglas Taylor.

Gloucester started the game on the front foot, and that ultimately led to the hosts taking the lead after Ollie Hulbert burst through the Coasters defence and forced Chris Neal into parrying back into the path of Tomlinson, who slotted in from close-range.

Hoping to draw the Coasters level, Will Hatfield tried his luck from distance, though couldn’t generate enough power on the effort to trouble Harvey Wiles-Richards in the City goal.

Despite the goal, the half was a quiet one, with just one more chance coming for the hosts and Tomlinson as he fired straight into Neal’s hands from a tight angle just inside the 18-yard box.

James Rowe sent his side out for the second half, hoping they could prove a point and take something back to the Fylde Coast.

Haughton almost turned provider and brought his side level when he picked himself up from the deck after being brought down and attempted to lift one over the wall and into the bottom corner, but his effort deflected off the host of red shirts lining up and behind for a corner.

Gloucester had one half-chance in the second 45 through King when he lined a shot up from just outside the box – however, the ball ran on through to Neal in the Coasters goal.

It wasn’t a game that was blessed with chances, but with just under 20 minutes to go, Haughton almost levelled when he switched the ball from his right foot to his left and smashed a strike towards goal and off the bar.

As James Rowe’s side searched for the equaliser they sought after, the linesman’s flag was constantly up on the far side in the final stages to take away any chance of a goal, with both Osborne and Taylor bursting through the Gloucester defence on numerous occasions with no joy.