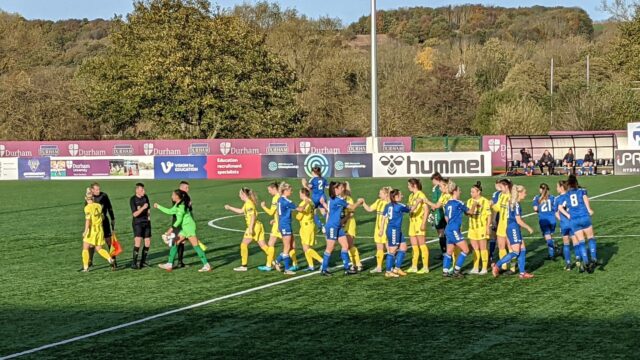 On a bright and blustery afternoon at Maiden Castle, the Coasters ran out 2-1 winners against Durham Cestria to advance to the Second Round of the FA Women’s National League Cup.

First-half goals from Beth Donoghue and Amy Hughes secured Fylde’s passage into the next round, despite Durham’s second-half fightback with a consolation goal from Jordan Olivia.

After a resounding 5-2 league win over Brighouse Town last Sunday, Fylde travelled to the North East with the aim of progressing further in the League Cup after overcoming FC United of Manchester and Sheffield FC in the preliminary rounds. Fylde could not have wished for a better start when Donoghue opened the scoring in the first minute. Employing a high press straight from the kick-off, Donoghue slotted past keeper Anna King with Fylde’s first attack of the game.

Minutes later, the Fylde defence were called into action when Durham forward Erin Nelson fired towards goal only to see her effort cleared off the line by Alex Taylor. The home side attacked again when Ellen Turnbull collected a pass from Grace Ayre and rifled a shot at goal, but Ellie Etheridge was equal to it in the Fylde goal. The visitors responded in the 16th minute when Amy Hughes raced to the byline and cut the ball back to Jodie Mortimer in the box, but Mortimer could only drag her shot wide.

It did not take long for the Coasters to double their advantage when Donoghue played a defence-splitting through ball to Hughes, who beat the offside trap and scored with a composed finish. The home side then looked to find a way back into the contest when Jen Knowles stepped up for a free kick in a dangerous position, but her effort went just wide. Shortly before half time, Donoghue almost found the net again when she directed a header at goal, but it flew inches wide of the post.

The Coasters started the second period with the same high intensity as they had started the first. Faye McCoy threatened the Durham goal when she created space and drilled a low shot narrowly wide. In the 51st minute, Etheridge got down well to repel a low drive from Hannah Greenwood on the counterattack. Etheridge was tested again a minute later when she made a smart save from Nelson’s long-range strike. In the 60th minute, Durham managed to reduce the deficit when Greenwood’s direct free-kick was tipped onto the bar by Etheridge, and striker Jordan Olivia was on hand to tap in the rebound from close range.

Much to their credit, the Coasters refused to buckle under the pressure, and instead created more chances of their own. In the 71st minute, Hughes delivered an inviting cross for McCoy in the box, whose powerful header was gathered well by Durham keeper King. Fylde defender Jenna Carroll joined the attack minutes later when she powered a header at goal, but King was again equal to it. In spite of Durham’s spirited second-half performance, the Coasters showed great strength to see out the game in the closing stages and thereby book their place in the next round of the League Cup.

Next up, Fylde begin their Vitality Women’s FA Cup campaign on Sunday 14th November when they travel to Wakefield Trinity Ladies FC in the First Round Proper, with kick-off at 1.00 pm at the Millennium Stadium.