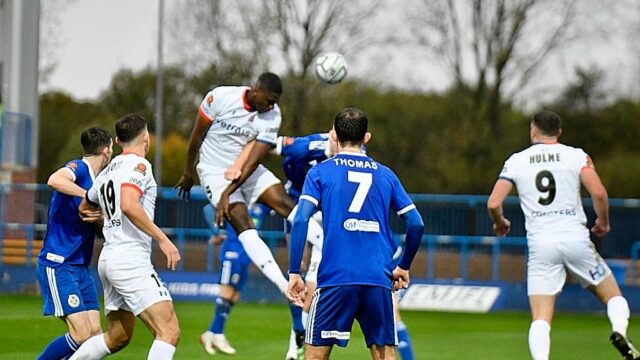 The Coasters fell to a 2-1 defeat on the road on Saturday afternoon, as Curzon Ashton claimed all three points at the Tameside Stadium.

Matty Waters put the hosts ahead after just three minutes when his right-footed cross caught Chris Neal out at the near post and found its way into the net. Nick Haughton then equalised for the Coasters moments after the interval after he picked himself to rifle a free-kick off the bar and in.

However, Curzon were to claim all three points when a corner from the right found Dale Whitham inside the six-yard box, who headed past Neal.

Jim Bentley made three changes to the side that beat Gateshead, with Danny Philliskirk returning from suspension, Emeka Obi coming in alongside Jamie Stott to replace Alex Whitmore and David Perkins., and Jordan Hulme returned in place of Jack Sampson.

The hosts got off to a flyer at the Tameside Stadium when Waters found himself out wide and crossed right-footed into the area, somehow catching Chris Neal out at his near post to put the Nash ahead early on.

Despite the early setback, the Coasters went in search of an equaliser. Nick Haughton won the ball back in the middle third and slid Joe Piggott in behind the Curzon defence, but a superb recovery tackle from Harry Flowers directed his strike away from goal.

Jim Bentley’s side was in control of the game despite being behind, and that led to Jordan Hulme being fouled on the edge of the area. Nick Haughton fancied his chances from the set-piece but saw it deflect off the wall and away.

Joe Piggott and Jordan Hulme then went close just seconds before the break. First, Piggott worked some space for himself 20 yards from goal to shoot, though saw the attempt take a nick off a blue shirt and behind for a corner.

The resulting corner eventually found its way to Hulme, who controlled, swivelled and fired into Chris Renshaw’s gloves.

Instantly after the restart, the Coasters drew level. Nick Haughton was brought down by Marcus Poshca on the edge of the box as he ran through several blue shirts. The midfielder then got himself up off the deck and arrowed the free-kick off the bar and into the net.

Curzon, however, weren’t for lying down, and that proved when the ball found its way to substitute Dale Whitham at the back post, who headed just over from close range.

Whitham made no mistake with the second chance that came his way, though, as a corner swung in found him inside the six-yard box, and his header crept under Neal’s body and inches over the line.

Straight down the other end, Philliskirk found himself in acres of space to thunder a shot goalwards, though saw the ball whistle over the bar.

A last-minute opportunity came for Fylde when Haughton was brought down again on the edge of the area. He placed the ball down and curled the free-kick towards the top corner, but Renshaw did enough to palm the effort away from goal.