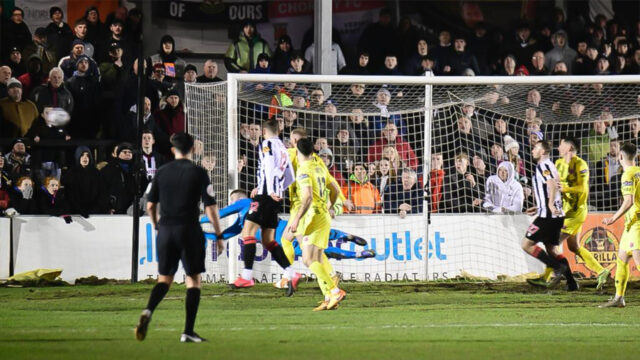 The Coasters were left to settle for a point at Victory Park after a late Mike Calveley goal saw the game end all square.

Fylde were gifted an early goal as Matt Urwin hummed and erred, and with Nick Haughton applying pressure, the Chorley shot-stopper saw the ball hit the midfielder and roll into the net.

Just ten minutes later, Haughton had a second when he took aim from distance and squeezed an effort under the legs of Urwin and in.

It was a tale of two halves, though. First, Jon Ustabasi’s deflected effort wrong footed Bobby Jones and rolled into the net before Mike Calveley’s goal earned Chorley a point at the death.

Jim Bentley made two changes to the side that secured a 2-1 victory over Guiseley AFC, with Luke Conlan & Nathan Shaw coming in to replace Jack Evans & Sam Osborne.

The Coasters had a dream start when Haughton charged Matt Urwin down in the Chorley goal, who attempted to clear the danger, but the ball hit the midfielder and made its way into the net.

Chorley came forward almost instantly after the opener, with Willem Tomlinson trying his luck from distance, but Bobby Jones gathered comfortably into his chest.

However, the Coasters were in the mood. Whitehead drove forward and squared the ball to Haughton – he drove inside and unleashed a strike towards goal, which found its way through Urwin’s legs and in.

Another chance fell to Fylde and Philliskirk after a well-worked corner routine eventually fell to the midfielder, who swivelled and took a shot at goal, which was blocked by the several Chorley shirts on the line.

Bobby Jones was then called into action when a cross into Connor Hall was flicked towards goal, but Jones made a point-blank save with an outstretched leg.

Just before the break, the hosts could have halved the deficit through Hall again, but a tremendous sliding challenge from Alex Whitmore prevented the shot from troubling Jones in the Coasters net.

Chorley came out for the second half up for the fight, and it paid off, as Jon Ustabasi drifted inside to shoot low and hard towards goal, with the ball taking an unlucky deflection off Whitmore and into the net.

Nick Haughton had a brilliant chance to add his and Fylde’s third of the game after Philliskirk slipped him in behind the Chorley defence, but he ended up firing high over the bar.

Ustabasi went in search of his second of the evening when identical to his first, he drifted inside and looked for the near post, though Jones was equal to it and kept him out.

There was late drama to be had which saw Chorley grab an equaliser. After a corner floated in was flicked on at the near post, Calveley was round the back to turn home in the dying embers of the game to earn the Magpies a late point.