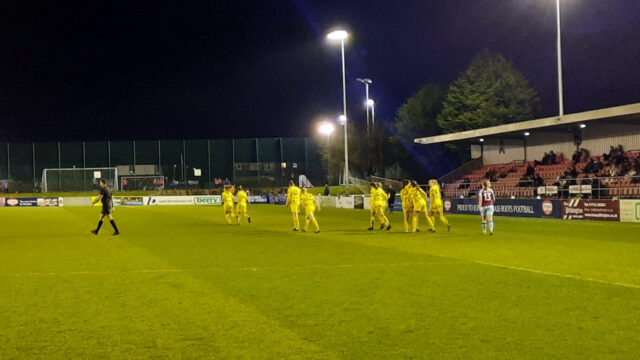 The Coasters twice came from behind to earn a 2-2 draw against Burnley FC Women in an end-to-end contest at the County Ground in Leyland.

Showing the hallmarks of a never-say-die team spirit, the Coasters came away with a deserved point on Wednesday night thanks to a clinical finish by Amy Hughes and a late penalty by Faye McCoy.

As a result of Derby County’s mid-week win over Stoke City, Fylde slipped to second in the FAWNL Northern Premier Division, but remained a point ahead of Wolves in third.

Ahead of the fixture, the Coasters had continued their successful start to 2022 by reaching the semi-final of the Lancashire FA Women’s Challenge Cup after defeating Penwortham Town Ladies FC in the quarter-final at Kellamergh Park last Sunday.

Playing under the lights at the Lancashire FA’s County Ground, Fylde faced a Burnley side that had been on fine form in recent months. When the sides met in the reverse fixture back in August, the Coasters grabbed all three points with a 2-0 win at Mill Farm. However, Burnley got the better of the Coasters in November by knocking them out of the Women’s FA Cup with a 3-2 win at Kellamergh Park.

The Coasters made several changes to the starting line-up, including a return in goal for Khiara Keating and a start for Olivia Fuller in defence.

The game began at a frenetic pace as the Coasters struggled to get into their passing rhythm against a well-organised Burnley side. It was the Clarets who took an early lead in the 5th minute when Millie Ravening struck a long-range volley into the bottom right corner. After Olivia Wilson crossed from the right, Ravening controlled the ball on her chest before expertly volleying home from the edge of area.

Despite the early setback, the Coasters grew into the game and mounted a number of attacks with Beth Donoghue on the left, Emily Hollinshead on the right, and Faye McCoy through the middle. In the 25th minute, Hollinshead created space for a shot, but scooped her effort over the bar.

Minutes later, Burnley striker Evie Priestley ran through on goal, but Fylde defender Hannah Fryer recovered well to block her shot out for a corner. The resulting corner saw a Burnley header drift wide of the target.

On the half-hour mark, McCoy charged towards goal and looked destined to get a shot away, but was tripped by Melissa Brown on the edge of the area. After Brown was cautioned for the foul, McCoy’s curling free-kick flew just over the bar. For all their attacking pressure, the Coasters trailed at the midway point.

At the start of the second half, the Coasters introduced Amy Hughes in place of Donoghue up front and pressed for the equaliser. Collecting Hannah Forster’s cross-field pass, Sasha Rowe came agonisingly close to scoring when she struck a long-range shot that seemed destined for the top left corner, only for Burnley keeper Lauren Bracewell to make an outstanding save to tip the ball onto the bar.

In the 50th minute, Fylde finally drew level when McCoy played a deft flick into the path of Hughes, who raced past defender Dom Cooper and drilled a shot into the bottom right corner. The Coasters celebrated the goal with a sense of joy and relief.

Pressing for a second, Jess Holbrook then sent in a corner kick from the right that Jodie Redgrave headed towards goal, but her effort was gathered by Bracewell. Moments later, McCoy raced to the by-line and volleyed at goal from a tight angle, but her shot looped onto the roof of the net.

As the second half wore on, the Clarets also created a number of chances. In the 69th minute, Courtney Willis beat the offside trap and fired a shot that Keating saved well. Elizabeth Hamer then played a neat one-two on the edge of the box, but could not keep her long-range effort down.

In the 80th minute, the Clarets regained the lead when Hamer whipped in a cross that bounced off Fuller’s chest and fell invitingly into the path of Priestley, who slotted the ball into the bottom left corner. It was a sublime finish that could have left the visitors feeling deflated late on.

However, the Coasters battled hard to find an immediate response. From Hughes’s left-sided corner, substitute Jodie Mortimer rifled a first-time shot that went narrowly over the bar.

Coming forward once more, Mortimer then saw her cross hit the outstretched arm of defender Wilson in the area. The referee pointed to the penalty spot to give Fylde a lifeline in stoppage time. McCoy coolly stepped up and smashed the penalty kick into the left corner, leaving Bracewell with no chance.

As the referee blew the full-time whistle shortly after, both sides had to settle for a share of the spoils at the County Ground.

Next up, the Coasters welcome Wolves Women to Kellamergh Park for another eagerly anticipated league fixture on Sunday 30th January, with kick-off at 2.00 pm.