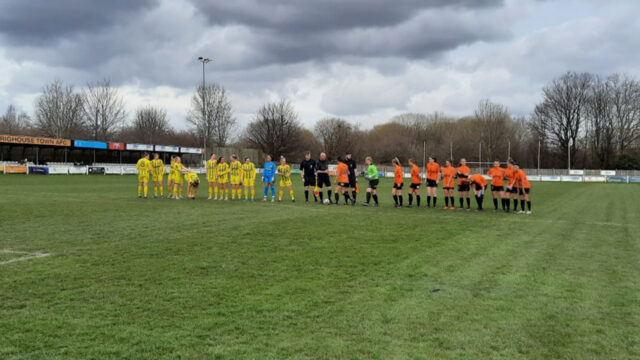 In a game of limited opportunities, the Coasters struggled to find the breakthrough until the closing stages when McCoy powered a free-kick into the top corner of the net for the winner.

It capped a fine team performance for Kim Turner and Danielle Young’s side, who earned a valuable win to keep pace with the chasing pack in the table.

In the reverse fixture earlier in the season, the Coasters had beaten Brighouse Town with an impressive 5-2 win at Kellamergh Park – however, Fylde travelled to the Yorkshire Payments Stadium knowing that they had to be firing on all cylinders to come away with the victory.

Turner and Young’s team went into the game in a confident mood after booking their place in the final of the Lancashire FA Women’s Challenge Cup with a 4-0 win over West Didsbury & Chorlton AFC Women.

The Coasters raced out of the blocks and almost took the lead after five minutes when Amy Hughes’s long-range strike rattled the crossbar before Jodie Redgrave hit the rebound over. Fylde continued to apply the pressure but could not fashion any clear chances to break the deadlock.

In the 27th minute, Laura Merrin curled in a free-kick that found Jenna Carroll in space at the back post, but Carroll was unable to direct her header towards goal. Minutes before the interval, Hannah Forster took aim from range, but her effort narrowly cleared the bar.

The Coasters came out rejuvenated in the second half and pressed for the opener. The next chance came from Merrin’s corner kick when McCoy nodded the ball back to Forster in the six-yard box. With her back to goal, Forster flicked her header narrowly over the crossbar.

On the hour mark, Hughes tested the Brighouse keeper with a low shot on the turn before Emily Hollinshead drilled a shot narrowly wide from distance.

At the other end, Fylde had to defend compactly against a pacey Brighouse attack, while shot-stopper Ellie Etheridge dealt well with the aerial threat from a number of crosses into the box.

With time running out, substitute Sasha Rowe burst through on goal, only to be tripped on the edge of the area. McCoy stepped up to rifle the free-kick into the top left corner, right into the stanchion of the goal. It sparked jubilant scenes as the Fylde players celebrated a dramatic late winner on the road.

Next up, the Coasters travel to Coles Lane to face West Bromwich Albion Women on Sunday 20th March in the FAWNL Northern Premier Division. This league fixture is scheduled to kick off at 2.00 pm.

The Coasters then meet Burnley FC Women in the final of the Lancashire FA Women’s Challenge Cup on Wednesday 23rd March at the County Ground in Leyland, with kick-off at 7.30 pm.