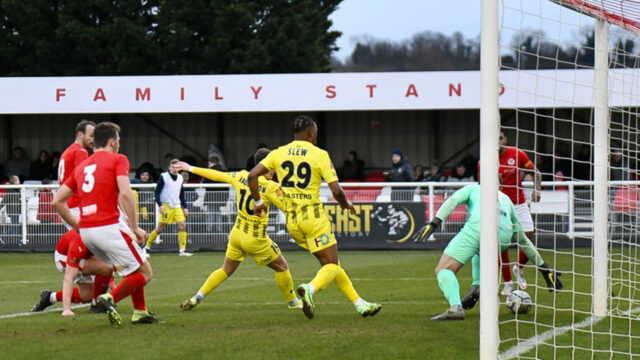 A wonder strike from Shepherd Murombedzi saw the Coasters narrowly defeated on the road against Brackley Town at St James Park.

Murombedzi’s strike was the difference in a tightly contested fixture between the two sides, despite the Coasters rallying to try and find an equaliser in the final stages of the game.

Jim Bentley made one change to the side that secured three points against Gateshead FC last time out, with Emeka Obi replacing Jamie Stott at the heart of the defence. Jack Evans & Ben Tollitt returned to the matchday squad and started on the bench.

The first real chance of the game came after Danny Whitehead was penalised for a high boot on the edge of the area. Murombedzi stepped up, but Chris Neal made a terrific save to his right to keep the effort out.

Whitehead then found himself with a perfect opportunity to put the Coasters ahead down the other end after he beat the offside trap, attempted to cleverly take it around Lewis and slot into the net, though the Town shot-stopper recovered well to get a hand to the shot.

In a half that didn’t have much to write home about, the Coasters had strong claims for what looked to be a stonewall penalty turned down by the referee when Nick Haughton was clipped and brought down by Gareth Dean.

Brackley were the first side to have a real opportunity after the break. Max Dyche clipped a ball over the top of the Fylde defence for Lee Ndlovu to run onto and volley first time towards goal, but he fired well over the bar.

Just minutes later, the hosts had another good chance to take the lead after Glenn Walker’s teasing cross to Ndlovu at the back post saw the striker force Neal into a good save with a close-range header.

The Saints were in the ascendency in the second half and Matt Lowe nearly had them ahead when he headed a deep Dyche cross inches wide at the back post.

However, the pressure eventually told when after a succession of Brackley corners, the Coasters did clear one, but only to Murombedzi, who unleashed a stunning strike from the edge of the box into the back of the net.

Looking for a way back into the contest, Haughton found space to hit a dipping, swerving strike towards the top corner, which Lewis kept out, springing across goal to tip the effort away.

There was time for last Coasters chance. First, Haughton had an effort destined for the top corner cleared off the line before Emeka Obi’s header was calmly gathered by Lewis in the Brackley goal to make sure of the points for Brackley.