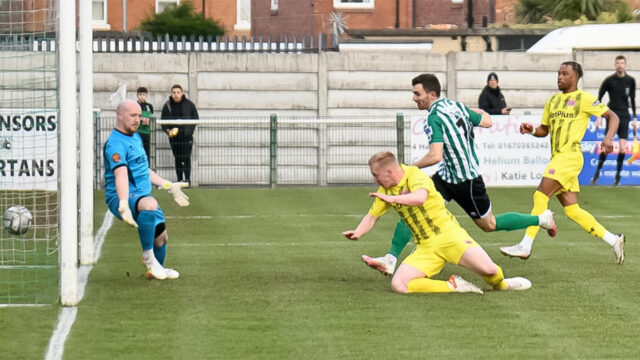 The Coasters bounced back from Tuesday night’s defeat with a 2-0 victory over Blyth Spartans at Croft Park, which saw Mark Cullen & Nick Haughton on the scoresheet.

It didn’t take long for Fylde to open the scoring when, after 16 minutes, Cullen peeled off at the back post to head in Dan Pike’s cross.

Blyth threatened to draw level, but Haughton ensured his side claimed the win when he converted from the penalty spot after Cullen was brought down by Toby Lees.

Jim Bentley made two changes to the side that was defeated 1-2 against Darlington, with David Perkins coming in to replace Luke Joyce and Nathan Shaw dropping to the bench for Mark Cullen, who was in for his full debut.

The game started at 100mph, with both sides looking to stamp their authority on the game, and the hosts had an early shout for a penalty when Lewis McNall went down under pressure from Harry Davis, but the referee gave the Coasters a free-kick and booked McNall.

As Fylde were growing into the game, Ben Tollitt went close with a volley from just inside the area before the deadlock was broken on the 16-minute mark.

Dan Pike burst down the right and whipped a superb ball into the six-yard box where Mark Cullen was waiting to nod in from close range on his full debut for the Club.

Although Fylde were in the ascendency, JJ O’Donnell had an opportunity to equalise when he met a corner from the left but couldn’t adjust his feet quick enough to get a clean connection on the ball.

Cullen was putting himself about, battling for every second ball and winning the majority, with the striker this time flicking on to Emeka Obi, who headed just over from 12 yards out on the stroke of half-time

Despite finding themselves behind, Blyth came out firing in the second half and almost found an equaliser through Corey McKeown, who struck over from outside the area.

The hosts were applying pressure to the Fylde backline – however, when the ball broke for Cullen, he turned and troubled Curran with a swerving effort from distance, though saw his effort saved.

After the Coasters’ dominance in the first half, the second was an even encounter, which led to O’Donnell first striking the post before McNall forced Chris Neal into a clever stop at his near post.

The pressure from the home side continued to mount when Patrick Almond was in acres of space on the right inside the 18-yard box and crossed into the area, which almost caught Neal out, but he managed to claw it off the line.

Chances were limited in the second half for the Coasters, but one arrived for Nathan Shaw, who hooked the ball towards the bottom corner, forcing Curran to scramble across his goal line to tip around the post.

As Blyth started to push forward, space was starting to appear for the Coasters to exploit. Haughton was getting in behind and clipped a ball around the corner for Cullen to chase down, and he was brought down by Toby Lees, who was shown a red card for being the last man.

Haughton, who was eyeing up his 18th goal of the season, stepped up and slotted past Curran to double the Coasters’ lead and make sure of the three points.