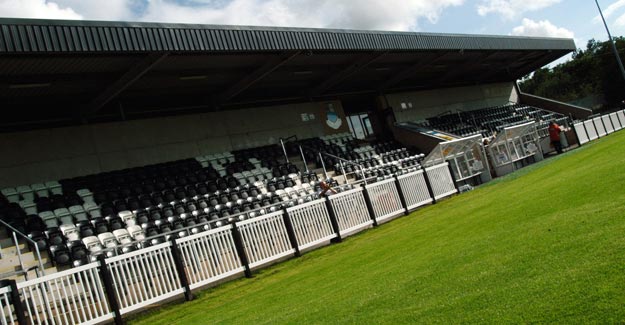 The Coasters secured their third victory of pre-season so far with a narrow 3-2 victory over local neighbours Bamber Bridge.

Fylde made the short trip down to the Sir Tom Finney Stadium, although there was nothing short in the performance on the pitch as a fine first half saw three goals scored from Danny Rowe, Danny Lloyd and Richie Baker to put Fylde 3-0 up at the half time break.

Alasdair Waddecar brought Brig back into the game on fifty-four minutes as he pounced first on a Milligan free-kick that had hit the post and Waddecar fired past Ben Hinchliffe to make it 3-1.

It then took Brig until the eighty-ninth minute to score their second and set up a nervy final couple of minutes, as home substitute Green scored an exquisitive chip as he lobbed the ball over Hinchliffe. However, that’s the way it stayed and The Coasters came away with another victory.

Former Football League forward Brett Ormerod had the first shot of the game as a good move down the right culminated in Ormerod finding space to get a shot away from the edge of the box but it sailed harmlessly over Ben Hinchliffe’s crossbar.

Danny Rowe got thirty-one goals last season for The Coasters and he got The Coasters off to a great start after nine minutes when he collected the ball about forty yards out before he beat a couple of midfielders before he fired the ball into the top left hand corner of the goal. An outstanding individual goal from Rowe.

Shortly after, Richie Baker fired over from an acute angle before Danny Lloyd ran onto a clever pass from the starting trialist but the former blasted well over the bar. The Coasters enjoyed better possession during the opening half an hour and they looked sharp.

Danny Lloyd made it 2-0 to Fylde after twenty-one minutes as he headed home from a couple of yards out past the onrushing Samberg. It was good build up play from Charles and Rowe down the right with the latter finding Lloyd unmarked in the box to head home the second.

The Coasters were in the mood to take their chances and the latest of these fell to Richie Baker on the half an hour mark after he was played through by a triaist. Baker found himself one on one with Brig keeper Samburg before he calmly slotted the ball into the bottom corner. 3-0 up and coasting, it seemed.

Curtis Thompson had Brig’s first real attempt at goal as he curled a shot from 20 yards out towards goal but it didn’t trouble Hinchliffe, and that summed up Brig’s half as they rarely threatened the Fylde goal.

After the break it was much of the same as Fylde had plenty of the ball as they brought on two trialists and Dom Collins came on Richie Baker, Tom Hannigan and Adam Sumner.

The first real chance of the second half produced a goal for the home side as Jamie Milligan’s free kick hit the post from 25 yards out, and Alasdair Waddecar fired home on the rebound from a couple of yards out high into the net to bring Bamber Bamber back into the game.

Hinchliffe was forced into making a save minutes later from Pickup after he hit a fierce shot towards goal and then Ormerod nearly found a way in but Hinchliffe was there again.

Dion Charles nearly added two more in the space of two minutes. First, he ghosted past the defence to put the ball in the back of the net but was flagged for offside. A minute later, Charles got the better of the left back but fired just wide. Richie Allen then had a pop from 25 yards out on the left hand side but it took a deflection and went just wide.

Brig keeper Samburg produced a fine save from Danny Rowe’s thunderous strike at goal from about 20 yards out, before Caspar Hughes tried a clever attempt from just inside the box but again it went for a corner, this time via a deflection. Substitute Cory Bent went closest to adding a fourth for Fylde as he tried to place one into the bottom left corner but a great save from sub keeper Dovey denied him.

Following another fluffy of substitutes, the game really settled down and neither side really had many other chances to score. Dom Collins had two late headers at goal but the first one, which was a like a bullet, flew just over and the second went harmlessly wide.

Brig got another goal back through Green on eighty-nine minutes after Green chipped the ball over Hinchliffe exquisitely – by far the best goal of the game. A solo run from Green and Hinchliffe was helpful as he watched the ball sail into the back of the net.

It was an impressive first half display from The Coasters which ultimately resulted in Fylde coming away with a 3-2 victory – their third out of four in pre-season so far.

Next up for The Coasters is Nantwich Town on Saturday.

Man of the Match: Caspar Hughes