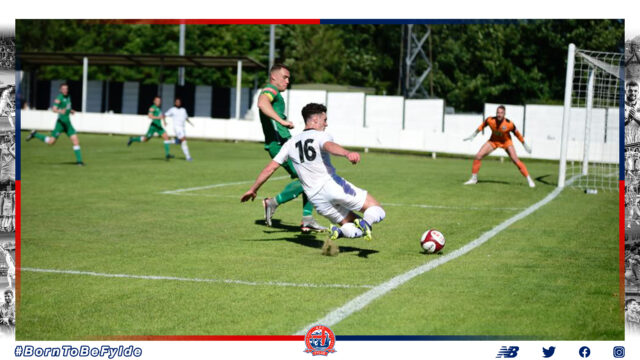 The Coasters and Atherton Collieries played out a 0-0 draw at the Skuna Stadium in what was Fylde’s pre-season opener of 22/23.

As the sun shone and supporters made their way through the turnstiles, it signalled that football was certainly back for another season of ups, downs and hopefully success.

A good 12 minutes had passed before any side had an opportunity on goal, which saw Trialist C try his luck from range, though he struck wide of the post.

Atherton had a chance of their own through their number nine, who aimed for the top corner and skimmed the bar with a right-footed effort.

For a first run out in pre-season, the first half didn’t have much to write home about apart from the already noted chances for the two sides.

A brand new XI took to the pitch for the second 45 as Rowe looked at the squad at his disposal.

There were promising signs going forward as Rowley, Haughton and Trialist E were showing good touches and looking bright on the move.

Haughton had an opportunity to float a ball to the back post for Emeka Obi to meet, though it evaded everyone and rolled out for a goal kick.

The Colls were promising on the attack, and their number 19 had a chance to take the Coasters by surprise with a speculative effort, which Chris Neal watched over his bar before seeing a sliced strike from their number 16 go inches wide of the post.

It turned out to be a typical pre-season fixture where both sides were finding their feet and fitness, but there was still time for Nick Haughton to try and put himself on the scoresheet – however, he could only watch the ball fall into the ‘keeper’s arms before the full-time whistle sounded.