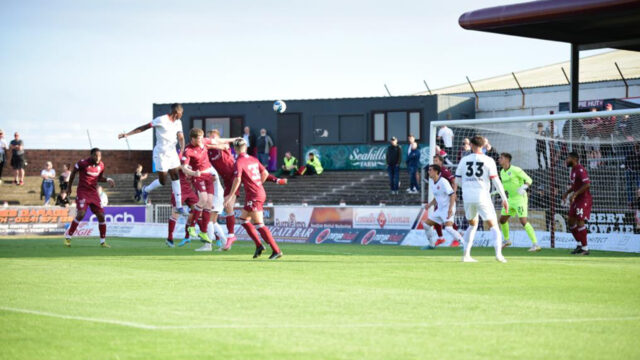 The Coasters made it three pre-season wins in a row with a 2-1 victory against Arbroath at Gayfield Park, thanks to goals from Emeka Obi and Trialist B.

Both sides had early opportunities inside the opening 11 minutes, but the first one came Fylde’s way after a superb switch of play from Pierce Bird allowed Connor Barrett to cross towards Sam Osborne, though Cammy Gill was off his line quickly to gather.

Almost instantly, Arbroath countered and forced Chris Neal into an outstanding, stretched save in the top left of his net before again seeing Fylde’s number one make a point-blank stop with his leg on the rebound.

You couldn’t argue either side taking the lead, but the Coasters took first blood when a floated corner from Danny Whitehead was met by Emeka Obi, who glanced a header into the top left corner.

A quiet 15 minutes then led to Arbroath almost finding an equaliser when Kieran Shanks met David Gold’s cross, but he could only head into Neal’s hands.

There was still time for one last first-half chance for the Coasters when Will Hatfield & Connor Barrett combined for the latter to drag an effort inches wide of the post.

Straight after the interval, the Coasters almost added a second after Sam Osborne’s cross was put on a plate for Joe Rowley, but he mistimed the header and the hosts cleared.

However, Fylde’s lead was soon to be doubled when some quick one-touch passing saw Nick Haughton release Jordan Cranston down the left flank, who squared to Trialist B for a tap-in.

Despite the control that James Rowe’s side had, Arbroath managed to pull one back through a Bobby Linn dipping, swerving free-kick from at least 35 yards.

Arbroath could have pulled level if it weren’t for a tremendous fingertip stop from Trialist A, who denied Thomas O’Brien from inside the six-yard box.

The hosts weren’t for giving up, and they had one last chance to try and snatch a draw, but Trialist A was there again to this time deny Jason Thomson.