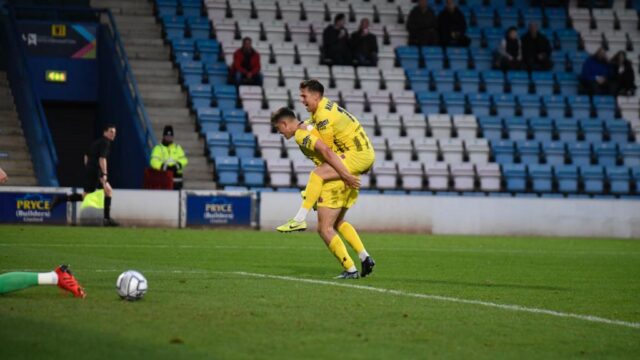 Two Joe Piggott goals on either side of the half-time interval were enough to come away with victory over Telford United at the New Bucks Head.

Telford took the lead after just nine minutes when Jason Oswell found space behind the Fylde defence to slot under Bobby Jones for the opener.

It looked as though the Coasters would head into the break a goal down, but on the stroke of half-time, Joe Piggott was left free at the back post to head in before striking once again six minutes after the restart.

Jim Bentley made two changes to the side that drew 1-1 with. Brackley, with Bobby Jones & Luke Joyce coming into the starting eleven in place of Chris Neal & David Perkins.

Despite the Coasters making a bright start to the game and almost finding an opener through Ben Tollitt, it was the hosts who were ahead after nine minutes, as Jason Oswell latched onto a through ball and fired under Bobby Jones from a tight angle.

The Coasters were keeping most of the possession after conceding, and that led to Fylde winning a corner. The corner was whipped in by Haughton, and it found Jamie Stott at the back post, who headed into the ground and into the hands of Ted Cann.

As Fylde went in search of an equaliser, Joe Piggott had an effort on goal blocked, and the hosts broke through McHale. He slid Tom Sparrow in behind, who beat Jones with a strike but couldn’t find a way past Stott on the line.

Telford then went close again through McHale after a well-worked corner from Durrell found him on the penalty spot, but he fluffed his lines and shot wide.

A succession of Fylde free-kicks were going to pay dividends eventually. First, Nick Haughton was denied from 40 yards out by a tremendous Cann fingertip stop before.

Moments later, the Coasters won themselves another free-kick out wide, which Haughton floated to the back post where Piggott was waiting to head into the net on the stroke of half-time.

It was a great end to the first half and a great start to the second half, as Telford managed to block two efforts from Sam Osborne and Nick Haughton, but on the follow up was Piggott, who slid and fired into the back of the net.

Jim Bentley’s side was now imposing themselves on the game more and more as time went on, and the next chance came through Conlan and Haughton, with the former crossing to the latter, who glanced a header wide of the post.

In the dying embers of the game, the Coasters were looking to make sure of the three points. Haughton played a corner short, received it back, danced away from his man and forced Cann into a save down low.