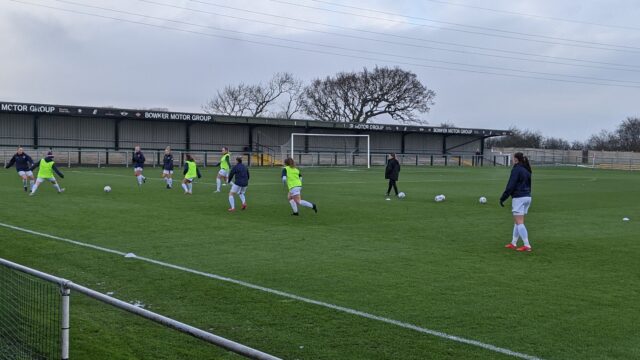 The Coasters fell to defeat against Burnley FC Women in the Second Round of the Vitality Women’s FA Cup on Sunday 28th November.

Entertaining their Lancashire neighbours at Kellamergh Park, the Coasters conceded three goals in the opening half-hour before rallying in the second half with goals by Jess Holbrook and Amy Hughes.

Despite their best efforts to level the tie, Fylde bowed out of the FA Cup against a strong Burnley side.

After securing a 4-1 victory away to Wakefield Trinity Ladies FC in the First Round, Fylde was hoping to advance further in the competition when they welcomed Burnley FC Women, who also compete in the FAWNL Northern Premier Division.

The fixture marked the 100th appearance for club captain Hannah Forster, who became the first female player to hit the century milestone for the club.

Fylde looked to apply pressure from the outset but were restricted to long-range efforts in the early proceedings. Faye McCoy’s speculative free-kick failed to trouble visiting keeper Lauren Bracewell, who was then on hand to turn Emily Hollinshead’s strike behind for a corner.

The Coasters responded with several forays into the Burnley box. ‘Keeper Bracewell did well to gather Hollinshead’s dangerous cross before being called into action moments later when she rushed out to block Forster’s shot at close range.

The Clarets came close to scoring again when striker Evie Priestley headed Lizzy Hamer’s cross onto the underside of the crossbar before Fylde eventually cleared their lines.

Burnley doubled their advantage minutes later when Priestley squared the ball to Katie Thomas, who tapped in from close range.

Fylde conceded a third on the half-hour mark when Hamer raced on to a through ball over the top and lobbed the onrushing Hunter to find the back of the net. It capped a devastating spell for the Clarets, who played out the first half in the ascendency.

The Coasters battled hard in the second half in a bid to find a way back into the tie. Whilst retaining possession well in the middle of the park, Fylde struggled at times to break down a resolute Burnley defence.

In the 50th minute, Burnley came close to extending their lead, only to be denied by Hunter, who got down low to block Hamer’s back-heel flick towards goal.

On the hour mark, the Coasters pulled a goal back when Holbrook rifled a shot on the bounce past Bracewell to reduce the deficit. At the other end, the Clarets threatened again when Priestley flashed an effort across goal that hit the post before her rebound was saved by Hunter.

The Coasters were reinvigorated in attack with the introduction of Amy Hughes and Beth Donoghue on the 65th-minute mark. Defender Alex Taylor arrived from deep to fire a low shot that was pushed behind for a corner.

From the resulting corner, Holbrook’s cross found substitute Hughes, who made no mistake with a powerful finish past Bracewell for Fylde’s second of the game. With only 15 minutes of the tie remaining, the Coasters pressed forward in search of an equaliser.

Laura Merrin curled in a cross that just evaded her teammates from charging into the box. Fylde introduced another striker in Mel Bartley, who came close to scoring in the 85th minute.

From Hughes’s corner kick, Bartley connected sweetly with a low shot, but it was blocked and scrambled away by the Burnley defence.

Despite a spirited fightback in the second half, Fylde’s adventure in this year’s Women’s FA Cup has come to an end. Their Lancashire opponents have been rewarded with a home tie against Liverpool FC Women in the Third Round.

Next, up, the Coasters travel to Derby County FC Women on Sunday 5th December in a rearranged fixture in the FAWNL Northern Premier Division.

This top-of-the-table clash kicks off at 2.00 pm at Mickleover Sports Club. Meanwhile, Fylde have been drawn away to Penwortham Town in the quarter-final of the Lancashire FA Women’s Challenge Cup, with the tie set for 23rd January 2022.