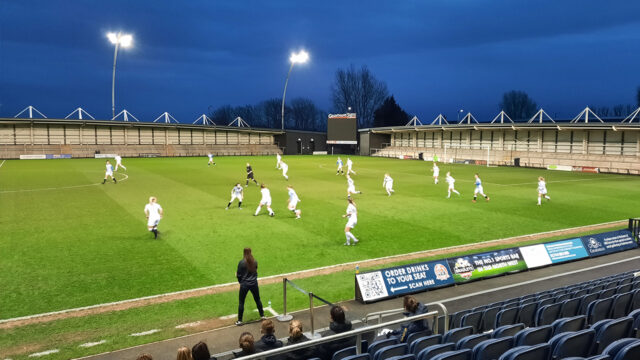 After an even opening half-hour, the Coasters conceded three quick-fire goals to leave them with a mountain to climb against a ruthless Terriers attack that netted two more goals in the second half before Fylde substitute Mel Bartley scored a late consolation.

The Coasters battled hard right until the end but succumbed to defeat against a formidable Huddersfield Town side that showed a real clinical edge in front of goal.

When the two sides last met in November, Glen Preston’s Terriers recorded a 3-0 win at the Stafflex Arena to condemn the Coasters to only their second league defeat of the campaign.

Prior to this reverse fixture, the Coasters had earned a hard-fought 1-0 victory over Hull City Ladies FC at Haworth Park to keep pace with the chasing pack in the table.

Joint managers Kim Turner and Danielle Young brought back Jodie Redgrave and Sasha Rowe into the starting eleven, while defender Jenna Carroll returned to the bench.

In the opening period, the Coasters moved the ball well and managed to contain their opposition on the counterattack.

After a quick exchange of passes on the edge of the area, Rowe rifled a shot into the bottom corner that was saved well by Bethan Davies in the Huddersfield goal.

As the tempo of the game picked up, Redgrave lashed a powerful shot from distance that stung the palms of Davies as the Coasters looked to break the deadlock.

However, it was the Terriers who took the lead in the 31st minute when a direct ball over the top was flicked on for Katie Stanley, who then calmly finished past Etheridge for the opener.

Huddersfield doubled their advantage barely a minute later when Laura Elford stole the ball in the Fylde box and confidently slotted home to leave the Coasters stunned. After all Fylde’s early pressure, the game quickly turned in the Terriers’ favour.

The hosts then had keeper Etheridge to thank once again when she rushed out to deny Katie Stanley with a fantastic one-on-one save moments later.

Huddersfield managed to extend their lead in the 42 minute when Elford collected the ball on the right, turned inside and curled an exquisite left-footed strike into the far corner to make it 3-0. As the visitors celebrated jubilantly, it was a tough blow for the Coasters to take just before the interval.

The visitors were quick out of the blocks and scored their fourth in the 53rd minute when a deep cross was converted by Elford racing in at the back post. Etheridge did well to parry Elford’s initial header before the Huddersfield striker smashed the rebound into the roof of the net to complete her hat-trick.

Fylde searched for a way back into the contest and pressed high with substitute Amy Hughes causing all sorts of problems for the visitors’ backline. Hannah Forster tested the keeper with a curling drive from distance on the hour mark.

The Terriers scored again from a swift counterattack when Stanley played in Paige Crossman to sweep the ball home in the 65th minute and make it 5-0.

Refusing to give in, the Coasters managed to grab a goal back in the 78th minute. From a short corner on the left, Jess Holbrook whipped in an inviting cross to the back post for Mel Bartley to finish from close range.

With only minutes remaining, Hughes came close to scoring a second for Fylde when she broke free down the right-wing and struck a rasping effort that was gathered by Davies at her near post.

Next up, the Coasters will look to get back to winning ways when they welcome Derby County Women to Kellamergh Park on Sunday 3rd April. This FAWNL Northern Premier Division fixture is set to kick off at 2.00 pm.