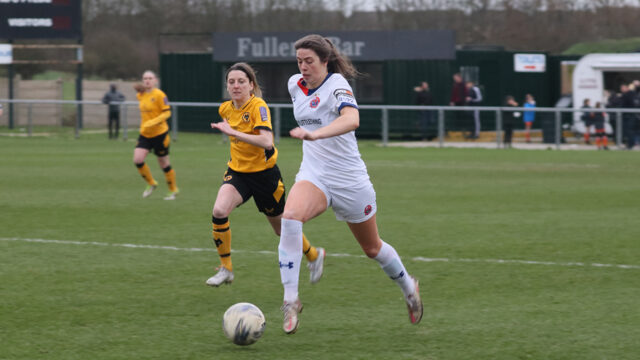 The Coasters came from behind to earn a hard-fought 1-1 draw against Wolves Women at Kellamergh Park in a top of the table clash in the FA Women’s National League on Sunday afternoon.

Despite leaving with a sense of frustration at not claiming all three points, the Coasters can take heart from another spirited fightback that extends their unbeaten start to 2022.

In the mid-week fixtures of the FAWNL Northern Premier Division, the Coasters twice came from behind to rescue a 2-2 draw against Burnley at the County Ground.

As for their opponents, Wolves took the local bragging rights in the Black Country derby with a 3-0 win at West Brom to keep pace with Derby County and Fylde at the top of the table.

In the reverse league fixture in early September, the two sides had cancelled each other out in an entertaining goalless draw at the CKW Stadium.

Fylde joint managers Kim Turner and Danielle Young named a largely unchanged line-up from last time out but gave starts to Jenna Carroll in defence and Amy Hughes in attack.

The Coasters started brightly and quickly took the game to the visitors. After sprinting down the left, Hughes flashed an early cross into the six-yard box that was turned behind for a corner.

Jess Holbrook’s lofted corner kick found Carroll ghosting in at the back post to head across goal, only for the ball to be scrambled away by the Wolves backline.

Fylde worked another opportunity in the 20th minute when Carroll’s long pass was expertly controlled in the area by Holbrook, who in turn teed up Hughes for a shot that Wolves keeper Shan Turner got down well to save.

In the 23rd minute, Wolves took the lead when Beth Merrick raced down the left wing, rounded Fylde keeper Khiara Keating, and buried the ball into the far corner. Despite a valiant attempt by Keating to narrow the angle, Merrick managed to reach the ball first, before turning inside and slotting the ball into the Fylde net.

Despite the setback, the Coasters continued to drive forward in search of a way back into the contest. Holbrook made a determined run through the centre and rifled a long-range shot inches wide of Turner’s right post.

Minutes later, McCoy tried her luck from a long-distance free-kick that flashed wide of the post.

With the pressure mounting, the Coasters came close to scoring in the 42nd minute when Emily Hollinshead collected the ball on the right, cut inside and curled a left-footed strike towards the top corner. The visiting keeper Turner had to be at full stretch to tip the shot over the crossbar.

The Coasters began the second half with the same intensity that they had ended the first. And they were soon rewarded with an equaliser in the 46th minute, albeit with a good slice of fortune.

Attacking down the right, Sasha Rowe showed neat footwork to beat two defenders and play in Hollinshead, who delivered a first-time cross to the back post that sailed over the diving Turner and into the far corner.

Shortly afterwards, Wolves then fired a warning shot when Amber Hughes dribbled down the right and struck a low cross that rattled the outside of the post, with Keating rushing across to cover her near post.

After some neat interplay on the Fylde right, Hollinshead once again took aim from a narrow angle, but this time Turner was equal to the effort.

The next notable chance fell to the impressive Hannah Forster, who latched on to Holbrook’s free-kick and dragged a shot just wide.

In the 83rd minute, Wolves striker Jade Cross beat the offside trap and lashed a shot on target that Keating saved well to keep the scores level.

With time running out, the Coasters pushed for a winner and pinned the visitors back in their own half. Attacking down the left, Hannah Fryer turned past two defenders and set up substitute Jodie Redgrave for a clear sight on goal, but Redgrave could only steer her effort wide.

In the dying embers of the game, Wolves were reduced to ten when Summer Holmes was dismissed for an off-the-ball incident. Keating floated the resulting free-kick to the front post, but Turner managed to collect the ball in a crowded six-yard box.

Ultimately, both sides had to settle for a share of the spoils on a hard-fought afternoon at Kellamergh Park.

Next up, the Coasters face Liverpool Feds in the quarter-final of the FA Women’s National League Cup on Sunday 6th February. The tie will be played at Kellamergh Park, with kick-off at 2.00 pm.