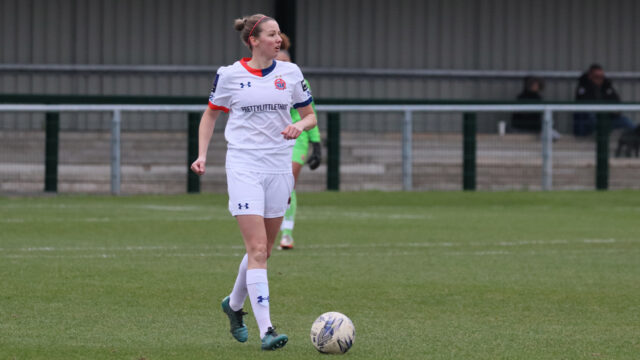 The Coasters bowed out of the FA Women’s National League Cup on Sunday with a 2-0 defeat to Liverpool Feds WFC at Kellamergh Park.

Fylde Women were left to rue their missed opportunities as they exited the FAWNL Cup at the quarter-final stage.

On a disappointing afternoon, Fylde Women came up short against a well-organised Liverpool Feds side that weathered the storm before scoring two all-important goals in the second half to reach the semi-final.

It was the third time that Liverpool Feds, who compete in the FAWNL Division One North, had conquered higher league opposition on their impressive cup run.

Fylde joint managers Kim Turner and Danielle Young named a similar starting line-up to the team that had fought back to earn a 1-1 draw against Wolves Women last time out. The only change was the return of Ellie Etheridge between the sticks.

The Coasters started brightly and posed an attacking threat from the get-go, although the wet and windy conditions made it difficult for both sides to find their rhythm.

After the visitors cleared away a series of corners, Emily Hollinshead received the ball on the right and crossed to Amy Hughes in the middle, who hooked a volley towards goal, but it was held by Feds ‘keeper Rachel Darbyshire.

Hollinshead again caused problems for the Feds defence when she turned inside and angled a shot into the near post, but Darbyshire was equal to it.

In the 23rd minute, Fylde came close to breaking the deadlock when Sasha Rowe floated a cross to McCoy, who powered a header just over the crossbar.

A rare first-half attack for the Feds saw Paige Cole work a shooting chance on the break when she darted past two defenders before hitting a tame effort wide.

On the cusp of half-time, Fylde almost went ahead when Hollinshead flashed a low cross for Hughes across goal, who was just unable to connect at the back post.

At the start of the second period, Laura Merrin and Beth Donoghue entered the fray and combined to give the Coasters more energy in attack.

After Donoghue was fouled just outside the box, Merrin’s resulting free-kick found Jess Holbrook in the centre, but her shot was blocked at close range.

Approaching the hour mark, the Feds countered when Jen Rogers sprinted into space and fired a low shot at goal, but Fylde keeper Etheridge got down well to save.

Finding space behind the Fylde backline, Chantelle Thompson opened the scoring for the Feds in the 65th minute with a composed right-footed finish that nestled into the far corner of the net. It was harsh on Fylde keeper Etheridge, who had kept the visitors at bay up to that point.

Looking for an instant response, Fylde then brought on Jodie Redgrave, who linked up well with the hard-working Hannah Forster in the middle of the park.

Finding joy down the right-wing, Holbrook then whipped in a cross that just evaded Donoghue’s outstretched boot at the back post.

In the 79th minute, Hollinshead rifled a long-range strike towards the bottom right corner, but Darbyshire got down well to save.

Attacking down the left-wing, Merrin was next to take aim, but Darbyshire was again equal to the effort.

In stoppage time, the Feds doubled their lead with another clinical finish on the counter. Chantelle Thompson regained possession high up the pitch and found Cole in space on the left. As Etheridge rushed out to narrow the angle, Cole calmly dinked the ball over her and into the back of the net.

With virtually the last kick of the game, Hollinshead saw a long-range effort blocked before Redgrave hammered the rebound at goal, only to be denied by Darbyshire, who saved with her feet.

Next up, the Coasters return to league action when they welcome Nottingham Forest FC Women to Kellamergh Park on Sunday 13th February in the FAWNL Northern Premier Division. The fixture will kick-off at 2.00 pm.