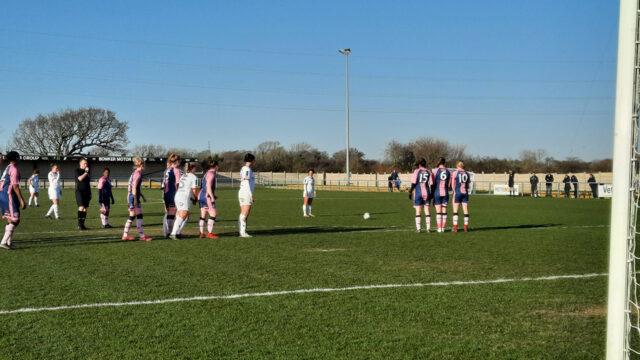 The Coasters put in a dominant display to overcome their semi-final opponents West Didsbury and Chorlton Women at Kellamergh Park.

In doing so, Kim Turner and Danielle Young’s side progressed to the county cup final, where they will face either Burnley Women or Fleetwood Town Wrens.

As for the visitors, West Women compete in the North West Women’s Regional Football League Premier Division under the management of Paul Caddick.

Having reached the semi-final stage, West Women were hoping to pull off an upset against higher-league opposition.

The opening goal arrived in the sixth minute from a short corner routine when Jenna Carroll controlled Sasha Rowe’s cross and calmly slotted the ball into the bottom corner.

Fylde almost scored again in the 23rd minute when Hughes raced down the left and cut the ball back for Jess Holbrook to fire at goal, but Holbrook’s strike was cleared off the line by West defender Bianca Blochl.

Despite some resolute defending by West, the Coasters managed to double their lead shortly before the interval. Young sent over a free kick that Hughes volleyed into the path of Olivia Fuller, who slammed home from close range.

The Coasters started the second period with the same intensity, and West keeper Claire Jefferson had to be alert to the danger posed by Hughes running in behind.

In the 68th minute, Hughes netted Fylde’s third goal with a clinical finish. Substitute Laura Merrin centred for Hughes, who capitalised on a loose ball before firing in off the post.

Substitute Emily Hollinshead was next to threaten when she drove forward and struck a powerful shot that Jefferson did well to save at her near post.

With full-time approaching, the Coasters were awarded a penalty for a foul on Rowe. Mel Bartley stepped up to take the spot-kick but dragged her effort wide of the post.

It did not take long for Bartley to make amends – however, when she volleyed Hughes’ floated cross into the top corner for Fylde’s fourth of the afternoon. The resounding victory sealed the Coasters’ passage into the final.

Next up, the Coasters make the trip across the Pennines to face Sheffield FC Women in the FAWNL Northern Premier Division on Sunday 6th March, with kick-off scheduled for 2.00 pm.