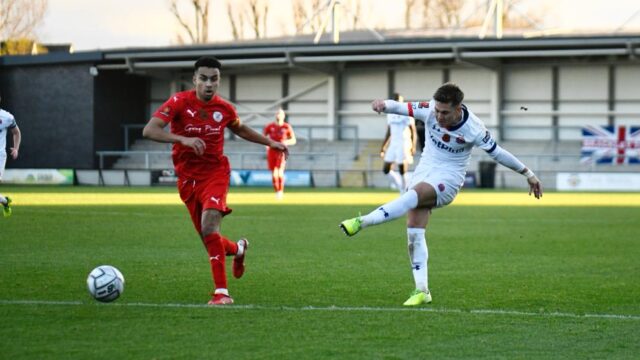 The Coasters shared the spoils in a six-goal thriller on Saturday afternoon, as Jim Bentley’s side maintain top spot in National League North.

Wes York opened the scoring for the visitors in the first half, before goals in quick succession from Nick Haughton and Emeka Obi put the Coasters in front.

Despite the hosts going in front once again through Haughton’s second goal of the afternoon after Lee Ndlovu’s equaliser moments before, Tre Mitford’s late goal earned the visitors a point at Mill Farm.

Jim Bentley made two changes to the side that fell to defeat against Curzon Ashton, with David Perkins returning to the side in the place of Luke Joyce and Sam Osborne replacing Jordan Hulme.

The top of the table encounter got off to a fast start at Mill Farm, with the Coasters having the best opportunity inside the first five minutes. The ball fell invitingly into Joe Piggott’s path inside the six-yard box, but the forward’s effort was blocked.

AFC Fylde continued to put pressure on Brackley Town in their efforts to break the deadlock. Nick Haughton’s shot from the edge of the penalty area was deflected into the path of Piggott, but the latter’s eventual close-range effort was well saved by Danny Lewis.

Though, it was the visitors who took advantage just before the half-hour mark after Lee Ndlovu’s cross from the right-hand side of the penalty area was met by Wes York.

Opportunities fell to both sides a few minutes after the restart. First, Luke Conlan’s cross was met by Haughton, but the latter failed to keep his left-footed effort on target.

The visitors also had a chance of their own moments later, but Louis Lomas failed to direct his header on target at the near post from a Brackley corner.

Jim Bentley’s side’s pressure paid dividends just after the hour mark as the Coasters scored two goals in quick succession. Haughton, who was a constant threat throughout, drove forward with the ball into the penalty area and his eventual effort ended up in the back of the net.

Haughton then set up AFC Fylde’s second goal of the afternoon, as his inviting corner was met by Emeka Obi, who rose highest to guide his powerful header past Lewis and score his first competitive goal for the Coasters.

Though, the goalmouth action did not stop there as the visitors momentarily drew level from Ndlovu’s close-range header, before Haughton restored the Coasters’ lead two minutes after his curling effort deflected up and over Lewis to send Mill Farm into pandemonium.

After pressure from the visitors, substitute Tre Mitford earned the visitors a dramatic late point after latching onto an inviting delivery to fire the ball past Chris Neal.