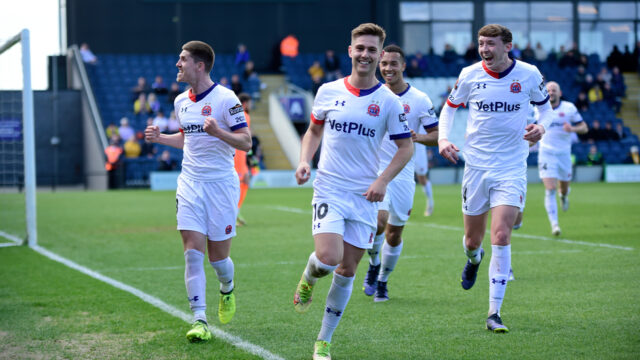 The Coasters made it four games unbeaten with a 3-1 Easter Monday victory over Chester FC at Mill Farm in the National League North.

Nick Haughton got the Coasters off to a flyer when he drove a well-executed shot into the far-left corner of the goal before doubling his tally with a Panenka penalty past Louis Gray.

Douglas Taylor extended his side’s lead just ten minutes into the second half when he latched on to Nathan Shaw’s cross at the back post, but despite Kevin Roberts pulling one back a minute later, the Coasters held on for the win.

Will Hatfield kept his place in the starting XI due to his ban only kicking in on Friday, just seven days after receiving the red card against Southport.

It was a great start to the game for the Coasters when Haughton put Rowe’s men in front after receiving the ball from Doug Taylor, who was set free down the left, to let fly into the bottom right corner.

The Coasters were enjoying most of the possession, but it was Chester who were almost level after Alex Whitmore’s slip when attempting to clear fell to the feet of Declan Weeks, whose powerful shot found the back of the North Stand.

Haughton was seeing plenty of the ball so far in the game, and after Nathan Shaw’s cross fell to him on the edge of the area, he could only fire wide of the post.

However, Rowe’s side doubled their lead after Sam Osborne went down under the challenge of Darren Stephenson, leaving the referee with no other choice but to point to the spot. Haughton stepped up and lifted a Panenka penalty into the back of the net.

A crazy few minutes were to get the half started. First, Rob Apter skidded a strike across the turf and into the hands of Jones before the Coasters raced down the other end and added a third.

Nathan Shaw received the ball on the left and flashed the ball to the back post for Douglas Taylor to tap in.

Despite looking comfortable in the game, the visitors did, however, pull a goal back when Declan Weeks sliced the ball to the head of Roberts, who wrongfooted Jones and diverted it into the far corner.

The game fell fairly quiet in terms of chances, but when one did arrive for the visitors from a George Glendon free-kick, Jones watched it sail over his bar.

Chester were finishing the stronger of the two sides, as Zack Clarke was next to try his luck, going close but seeing the ball cannon back off the post.

One last opportunity for the visitors came through Weeks after he blasted towards goal, with Jones once again preventing Chester from grabbing another and helping the Coasters to all three points.