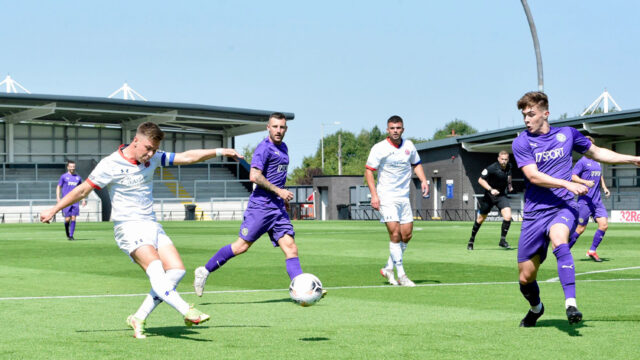 James Rowe’s side rounded off a good week of pre-season fixtures with a 3-0 win over Lancaster City at Mill Farm to make it an unbeaten start to the friendly games.

Goals from Nick Haughton, Trialist B and Sam Osborne were the difference on a hot day on the Fylde Coast.

For a friendly, the game had a quick start to it, with Evangelinos attempting to catch Neal off his line with an effort, but he ended up striking wide.

Nick Haughton had an early sight at goal after Kyle Morrison superbly won the ball back and played the midfielder in on goal, who dropped his shoulder and fiercely smashed an effort off the underside of the bar.

The Coasters managed to open Lancaster up well when the 30-minute mark was approaching after some quick transition play led to Haughton sliding in Rowley, who managed to find Jordan Cranston arriving late, but he curled inches wide of the post.

Just before the half-time whistle sounded, the Coasters almost took the lead through Haughton when after being brought down on the edge of the area, he picked himself up and clipped the set-piece over the wall and wide.

With six minutes gone in the second half, the visitors had their best chance when from a corner, the ball sat up nicely for Carroll to volley at goal but into the South Stand.

However, the game turned on its head just moments later. First, Trialist B slid Haughton out wide, which allowed him to step inside and unleash a curling effort into the top corner.

Trialist B & Haughton switched roles, with Haughton turning provider, spraying a ball over the top of the Dolly Blues’ backline for Trialist B to calmly slot into the bottom right corner.

It was three goals in quick succession after a superb passage of play led to Whitehead clipping a ball through to Harvey Gregson, who with one touch squared it to Sam Osborne for him to turn into an open net.

All subs were used by both clubs.