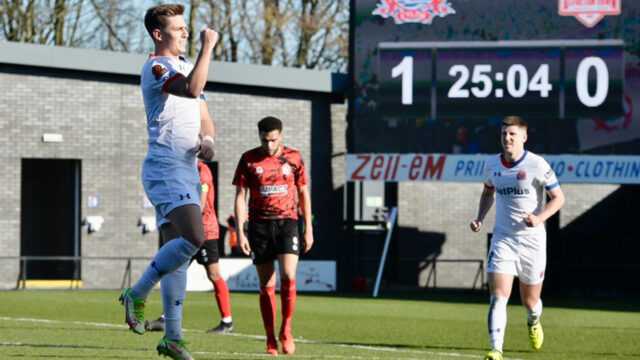 The Coasters earned a valuable three points against Alfreton Town at Mill Farm, thanks to goals from Jamie Stott, Nick Haughton & Danny Philliskirk.

Stott got Fylde off to a flyer in the first minute when he turned home from close range before Haughton bent a right-footed effort past Willis to double the Coasters’ lead.

Just before the break, Philliskirk completed the scoring when he poked home Jorome Slew’s timid attempt at goal, which turned out to be a big goal overall.

James Rowe made three changes to the side that drew with Telford United, with Kyle Morrison coming in for his debut alongside David Perkins and Slew to replace Luke Conlan, Dan Pike & Danny Whitehead.

It was a dream start to the game for the Coasters, as Nick Haughton played Slew in inside the area, who beat two men to flash a ball across goal where Jamie Stott was waiting to turn home.

The second nearly came in quick succession after Slew won a free-kick out wide, which left Haughton with the opportunity to swing into the area. Looking for bodies at the back post, the midfielder saw the cross evade everyone and cannon back off the woodwork.

Alfreton were failing to threaten so far, and the Coasters made them pay through Haughton when he combined with Philliskirk to drive inside, cut back onto his right foot and curl into the bottom corner of the net.

However, the one chance in the half they did have fell to Connor Branson, but his strike at goal was charged down by David Perkins to prevent an effort on target.

Rowe’s side managed to cap the half off in positive fashion when Tollitt skipped past his man on the left, set it back for Slew, who poked it towards goal where Philliskirk diverted into the back of the net.

Despite the Coasters being three goals to the good, the opening five minutes of the second half were probably the most lively so far.

First, Walker teed Haughton up on the penalty spot for a shot at goal, but Willis got down well to deny him before Dayle Southwell tested Neal in the Fylde goal moments later.

Though the Coasters were denied a fourth after Walker seemed to have extended his side’s lead with a well-taken goal – however, after confusion between the officials, the referee overruled his linesman and gave offside.

The visitors were still searching for a way back into the game and Yusifu Ceesay thought he found it but ended up dragging a free-kick from just outside the area wide.

Haughton had a perfect opportunity to put the Coasters out of sight when Tollitt played a defence-splitting pass through to the creative midfielder, but after drifting back onto his left foot, he ended up blazing over the bar.