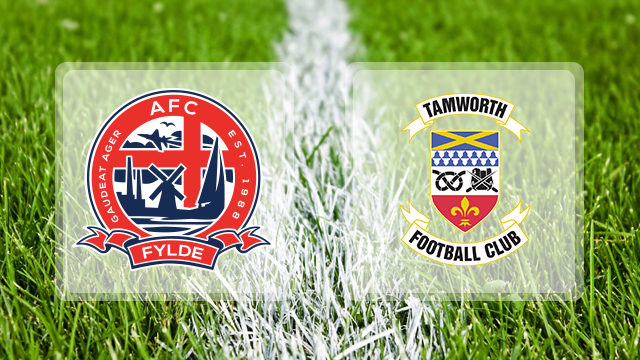 AFC Fylde picked up a point at home against a strong Tamworth side at Kellamergh Park in an end to end thriller.

Dion Charles gave The Coasters the lead after nineteen minutes with a well taken effort from just inside the box, before Elliott Durrell brought the scores level on sixty-seven minutes with an acute finish past Hinchliffe. Durrell was a nightmare for the Fylde defence all afternoon and would later add to his scoring tally.

Just four minutes after Tamworth equalized, Matt Blinkhorn gave Fylde the lead for the second time in the game with a towering header from a Richie Baker corner before the impressive Durrell grabbed his second for the away side just two minutes later. Durrell latched onto a long ball forward and fired past Hinchliffe to level the game and extend Tamworth’s unbeaten start to the season.

It was one of the Coasters form players so far this season Dion Charles who had the first shot in anger after just a couple of minutes but his left footed attempt wasn’t troubling Belshaw in the Tamworth goal as it went harmlessly over the bar.

Elliott Durrell had the away side’s first attempt at goal but his shot from the right didn’t trouble Hinchliffe as it went wide. Stephen Tommassen then tried his luck from a good 30 yards out but his rasper was comfortable for Hinchliffe who got his body behind it.

Durrell looked lively in the opening period and saw a serving free-kick from 25 yards well saved by Hinchliffe although he nearly made a mess of it. Ross Dyer somehow found himself through on goal after a defensive mix up just minutes later but couldn’t pounce quick enough, before Durrell went even closer to scoring with a terrific shot that went just wide of Hinchliffe’s far post.

It was the away side who had most of the early chances, but The Coasters got the breakthrough on nineteen minutes when Dion Charles played a one-two with Matt Blinkhorn before being played in and he fired past Belshaw. It was Charles fourth goal of the season and The Coasters had the lead.

Recent signing Ben Holmes could have doubled The Coasters lead five minutes later as he was played in by Sam Finley but Holmes took too long to think about where to place his shot and eventually Belshaw came out and smothered the shot with relative ease.

The Coasters then produced one of the moves of the game on the counter attack after a Tamworth corner. Richie Baker fired the ball upfield after Newton went close for the away side, and Charles ran onto it way up field. Charles found Blinkhorn who did well to turn past a defender and find Charles again who fired across the face of goal, only for Rowe to hit the side netting from just a couple of yards, albeit from a tight angle.

Coasters ever-present Caspar Hughes, usually a right back but today a left back, did well to beat a couple of men down the left before finding Blinkhorn in the box who glanced a header just wide of Belshaw’s goal.

Within a minute of the restart Tamworth nearly found a way back into the game as a long punt forward found Newton via a flick on from Dyer, but the former poked the ball straight at Hinchliffe from a good position just six yards out when it looked easier to score.

Captain Paul Green tried his luck for the away side from just outside the box with a curling effort at goal but much like most of Tamworth’s previous chances, it wasn’t troubling Hinchliffe. Durrell was by far Tamworth’s most productive player in this game and his fifty-eighth minute effort went a little closer to seeing the away team get back into the game but his curled effort went just wide.

Elliott Durrell took centre stage for the visitors on the sixty-seventh minute as he fired past Hinchliffe from a tight angle to bring the away side level. It was a clever goal from the Tamworth winger as he darted past Gibson to the byline, cut inside and shot from an acute angle to beat Hinchliffe. 1-1.

Top scorer Dion Charles went close to immediately regaining the lead for Fylde with a fierce shot at goal but Belshaw was equal to it, tipping it over for a corner. And then The Coasters re-took the lead. Baker fired the ball into the box and there was Matt Blinkhorn to head the ball past Belshaw into the empty net. Proficient with his head, Blinkhorn was left unmarked from the corner and easily guided his header into the back of the net. 2-1 Fylde.

But The Coasters lead only lasted two minutes, as Durrell was at it again, this time running onto a long ball forward by substitute Jed Davies before poking the ball past Hinchliffe from a few yards out after finding himself in acres of space. Three goals in the space of seven minutes really brought the game to life and with fifteen minutes to play, the score was level at two apiece.

The ever impressive Charles went ever so close to putting Fylde in front for the third time in the game but his shot from just inside the box took a wicked deflection and ended up the wrong side of the post and out for a corner, which Tom Hannigan headed over the bar.

There was a late chance for Blinkhorn to nick a winner in stoppage time as he connected with a low cross from Finley, but the former’s header went over the bar.

Whilst The Coasters picked up just a point against Tamworth, it was a good point in the end as the game ended 2-2.