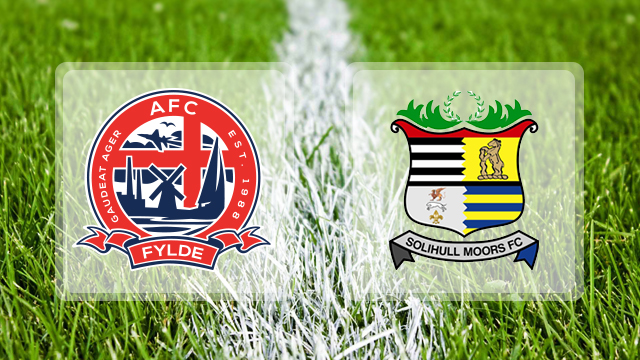 It was an unfortunate end to a great game of football at Kellamergh Park, as AFC Fylde picked up a point against a resilient Solihull Moors side after the sides drew 2-2.

Darryl Knights broke the deadlock for the away side as he found time and space to find the back of the net after 20 minutes, before goals from Danny Rowe and Richie Allen saw The Coasters take a 2-1 lead just after half time.

It took a bit of luck for Solihull to get anything from the game, as referee Graham Fyvie awarded Solihull a penalty kick in the 93rd minute and the Conference North’s top goal scorer Omar Bogle converted for the away side as they stole a point when it looked likely that Fylde would take all three.

Fylde started the brighter of the two sides and had the first opportunity of the game. A fantastic cross in from the right of the penalty area from Richie Allen, Richie Baker came in late at the back post but he poked the ball just wide.

Just a couple of minutes later, Stefan Moore found some space in the Coasters box and he shrugged off the defender and hit a fierce shot at Hinchliffe’s goal, but the Fylde keeper did really well to keep the ball out of the net with his feet.

A great ball over the top of the Moors defence then saw Danny Lloyd race through to go one on one with Solihull keeper Breeden but Lloyd’s touch was poor and it was easily dealt with.

Then came the breakthrough for Solihull on the 20 minute mark. Darryl Knights scored it for the away side, as he calmly slotted home from just inside the box to really throw a spanner in the works for The Coasters who had been slightly on top in the opening period of the game.

Richie Allen then got on the ball again on the half hour mark, finding Josh Wilson with a fantastic ball into the box but Wilson’s header went wide when it looked easier to score. Solihull were then nearly undone by a training ground routine corner kick, as Richie Baker fired in towards Allen who stooped low to head just wide.

Straight down the other end, and a defensive mix up at the back allowed the impressive Stefan Moore in and he flicked the ball towards goal, but Hinchliffe was there again to deny the Moors striker.

The league’s top scorer Omar Bogle then went close as he ghosted past the Coasters defence and his near post shot required another save with his feet from Hinchliffe. The lively Richie Allen then tried to just guide the ball into the bottom left corner but Breeden in the Coasters goal read it well and kept it out with ease.

Just before the half time whistle, Solihull had a couple of golden chances to go into half time two goals up. First, Omar Bogle hit a left footed free kick towards goal only for Hinchliffe to get down well to his right and keep it out, and from the resulting corner, Reece Fleet going close with a shot that went only a couple of inches over the bar.

Fylde were somewhat on the ropes before the break, however, their luck changed completely at the start of the second half as The Coasters scored within three minutes of the restart to bring the game level.

Adam Sumner played the ball towards goal, Danny Rowe latched onto it and managed to manoeuvre himself around the Solihull captain Liam Daly before lifting the ball over the oncoming Breeden to make it 1-1.

The Coasters then went close to taking the lead for the first time in the game, Rowe firing towards goal again but this time it was cleared off the line by one of the Solihull defenders after it found a way past Breeden.

On the 55 minute mark, The Coasters did take the lead and it was Richie Allen who scored it after great work from Danny Rowe to find him unmarked in the six yard box, leaving Allen to tap in from a couple of yards out. A complete turnaround for Fylde in the early part of the second half and the score was now 2-1 to The Coasters.

Ten minutes later it was the turn of Richie Baker to have a go at Breeden’s goal as he controlled well in the penalty area but his curling effort was well dealt with by the Solihull keeper.

Just after, Josh Wilson tried his luck from just outside the box and it took a deflection which took the ball away from goal and out for a corner, and without the deflection it would have gone in to increase Fylde’s advantage but it wasn’t to be.

Richie Allen then did wonderfully well to get past the Solihull back line before dragging a left footed shot wide, before Danny Lloyd found space in the box to get a shot away but it fell to him on his weaker right foot and he scuffed it wide.

With just 20 seconds of added on time left, Solihull were awarded a penalty for an adjudged handball by Josh Langley in the box. Omar Bogle tucked it away to level the score with almost the last kick of the game.

There was still time for Richie Baker to fire a shot in at goal straight from the restart, but Breeden was more than equal to Baker’s attempt and the game finished two apiece.