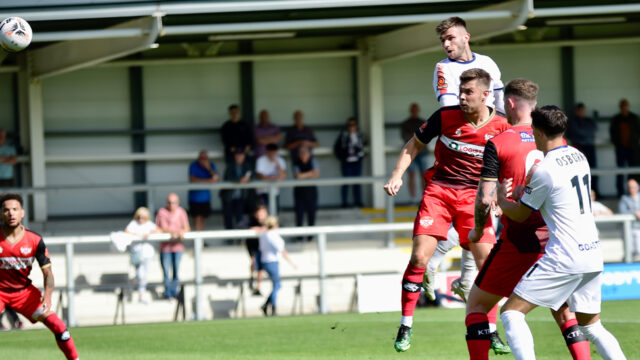 It was the perfect start to the 22/23 National League North season for the Coasters after goals from Connor Barrett and Nick Haughton secured an opening day victory.

Fylde fell behind early on despite looking the stronger of the two sides after Jordan Graham chested in from close range.

Fylde’s consistency of chances finally paid off when Connor Barrett got to the back post to nod in before Nick Haughton got himself off the mark with a well-taken finish.

There were league debuts in the Coasters side for the likes of Barrett, Cranston, Rowley and Holmes to name a few.

Despite, Andrew Oluwabori having an early sighter at goal with a tame effort from the edge of the area, there wasn’t much in terms of chances for either side other than Emeka Obi heading over from a Nick Haughton corner.

The Coasters had some fantastic opportunities to take the lead after 25 minutes when Alex Whitmore had a header cleared off the line before Haughton jinxed his way in and out of the Kettering defence, only to have his shot saved by Cameron Gregory.

However, although the Coasters were pushing to open the scoring, it was the visitors who took the lead when Jordan Graham turned in a cross at the near post.

The lead didn’t last for long, though, as Pierce Bird found space to swing a left-footed cross to the back post where Barrett was waiting to head in his first Fylde goal.

James Rowe had his side fired up for the second half, and they almost took the lead when Joe Rowley fired wide from inside the area before Jordan Cranston headed Barrett’s cross over from close range.

It was all Fylde in the second half, and Holmes almost put the Coasters in front when he got on the end of Cranston’s dangerous cross but couldn’t quite direct the effort goalwards.

Although, that chance missed didn’t matter when Alex Whitmore switched play superbly to Cranston, who took the ball down well on his chest to cross to Haughton, and he turned on a sixpence to find the right corner of the net.

There was still time left in the game as the clock ticked down for both Sam Osborne & Nick Haughton.

First, Osborne was released down the middle by Whitehead and set himself nicely for the shot, but he was quickly closed down by the on-rushing Gregory.

In the dying seconds, Haughton was gifted the opportunity to grab his second of the afternoon – however, a superb sliding challenge from White played the ball back off Haughton and out for a goal kick before the referee blew for full-time.