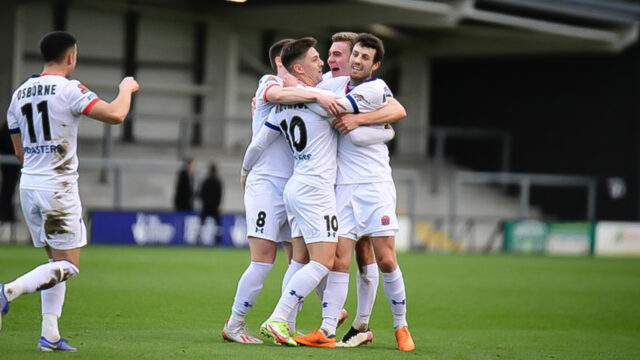 The Coasters made it back-to-back wins in their first home game of the year with a 2-1 victory over Guiseley AFC in the National League North.

Ben Tollitt put his side ahead on the 15-minute mark when he was gifted with an opportunity in front of goal after a mix up between Hamza Bencherif and Owen Mason.

A well-taken finish from home debutant Danny Whitehead doubled the Coasters’ lead just six minutes later with a driven strike from just outside the area before Thierry Latty-Fairweather halved the deficit.

Despite a quiet second-half, the game did see a little bit of action when Andrew Hollins received his marching orders for a second yellow card after a foul on Nick Haughton.

Jim Bentley named an unchanged starting eleven from the 2-0 away victory over Leamington FC, though there were places on the bench for Luke Conlan, who returned from injury and new signing Tom Walker.

Fresh off the back of his goal against Leamington, Sam Osborne had the first chance of the game as he spun his marker inside the area and found space to unleash an effort at goal, though saw it rise over the bar.

Despite an even game, Tollitt was presented with a perfect opportunity from six yards out after a mistake in the Guiseley defence between Hancherif and Mason, which he calmly slotted into the back of the net.

The Coasters soon had a second after Haughton danced his way through several Guiseley shirts to lay Whitehead off on the edge of the area, who struck low and hard into the bottom left corner.

Guiseley, however, weren’t for giving up as Dom Tear tested Bobby Jones, but the Fylde shot-stopper stood firm to keep him out.

That chance eventually led to the visitors halving the scoreline when the Coasters had many attempts to clear any danger surrounding the goal but couldn’t, and debutant Thierry Latty-Fairweather finished well into the top corner.

Confidence was still flowing through the Coasters side, though, as Tollitt squeezed his way past Hollins and forced Owen Mason into a good save down to his left.

Jack Evans then received the ball in acres of space before hitting a ferocious, swerving effort towards the top corner, but Mason once again produced a brilliant save.

Osborne started the second half just like he did the first – with a chance on goal. The wide midfielder latched onto Tollitt’s defence-splitting pass and struck the underside of the bar from 12 yards out.

Out of the blue, the visitors were down to ten men when Hollins, who was already on a yellow card, went through the back of Haughton, leaving the referee with no other choice than to brandish a second yellow and then a red.

A solid spell of Coasters possession eventually left Tollitt with bags of space just outside the 18-yard box to line a shot up, with the outside of the post denying him from doubling his tally for the afternoon.

In a half that didn’t see much created, there was one last chance for the Coasters and substitute Jack Sampson after his first attempt to slip Tom Walker in on goal rebounded back to him to strike low and hard towards the bottom corner, but Mason saved cleverly with an outstretched arm.