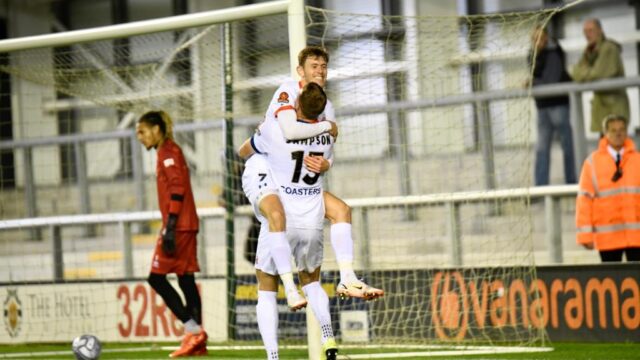 The Coasters returned to winning ways under the lights at Mill Farm as they ran out 2-0 winners against Spennymoor Town.

A Ben Tollitt brace ensured Fylde picked up all three points. Tollitt put the Coasters ahead after nine minutes, as his effort deflected past Eve and into the net. His second of the night came moments after the restart when he struck low and hard into the bottom corner.

There was two changes to the Fylde side from Saturday’s 1-0 defeat, as new signing Kieran Lloyd made his debut at right-back and Jack Sampson returned to the starting XI. They replaced Luke Joyce & Nathan Shaw.

Danny Philliskirk was available despite being sent off against Farsley Celtic, due to his suspension not taking effect until this weekend’s visit of Gateshead.

Jim Bentley’s side made a bright start to the game as both Ben Tollitt and Jack Sampson both had chances inside the opening seven minutes.

First, Tollitt cut inside and unleashed a fizzing effort towards goal, which Dale Eve gathered well before Tollitt then tried to turn provider with a great cross to Jack Sampson, but he headed wide.

The deadlock was broken when Joe Piggott drove from midfield and released Tollitt out wide. He took one touch and struck goalwards, seeing his shot deflect off a Spennymoor shirt, over Eve and into the back of the net.

Nick Haughton was yet to have his first chance of the game, though when it came, Eve was equal to keep out the midfielder’s rasping strike.

Then, Haughton’s dancing feet left Ryan Hall on the deck, leaving a perfect opportunity to arrow an effort towards the bottom corner, though Eve got down well to keep him at bay.

With just five minutes to go until the half-time interval, Jack Sampson was unlucky not to double the Coasters’ lead after he dropped his shoulder and smashed a left-footed strike onto the post.

It didn’t take long for the Coasters to find their rhythm again. Superb work from debutant Lloyd saw him drift inside and find Tollitt, who fired into the bottom left corner.

The wide midfielder was having a great game and went in search of his third of the night when a brilliant solo run resulted in him stinging the palms of Eve with a driven strike from distance.

Fylde were enjoying the majority of possession in the second half as Haughton & Tollitt both forced Eve into two strong stops at his near post.

Spennymoor had a chance of their own at the death after terrific hold-up play from Taylor allowed him to find substitute John Lufudu just outside the area, who zipped an effort across the Mill Farm surface and towards goal, forcing Neal into a good save.