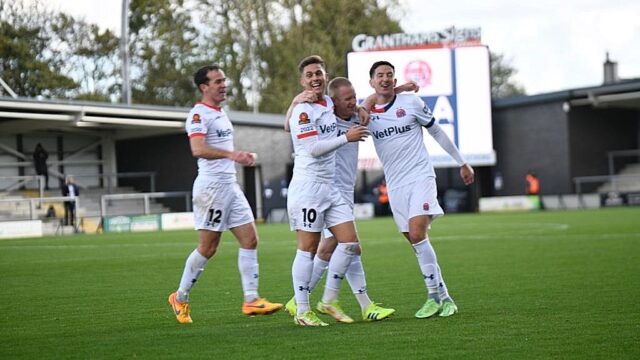 First-half goals from David Perkins and Joe Piggott secured a comfortable victory for the Coasters, as Jim Bentley’s side extended their lead at the top of the National League North table.

AFC Fylde made it four wins from six games in the National League North, after a 2-0 victory over Gateshead on Saturday afternoon. David Perkins’ fantastic volley set the Coasters on their way before Joe Piggott’s clinical finish from close range doubled the lead two minutes later.

Jim Bentley made one change from Tuesday’s victory over Spennymoor Town, as Luke Joyce replaced Danny Philliskirk in midfield, with the latter being unavailable due to suspension.

The visitors started on the front foot at Mill Farm, with Coasters captain, Alex Whitmore, blocking on two consecutive occasions to prevent Chris Neal from being called into action early on.

Though, it was the Coasters who came the closest to taking the lead just before the 15th minute mark. Luke Conlan’s inviting ball was met by Kieran Lloyd at the back post, but the full-back was denied from close range by Gateshead goalkeeper Jacob Chapman.

Fylde grew into the game as it went on and their pressure eventually paid dividends twice in quick succession. The hosts won the ball in a dangerous area high in the opponent’s half before the eventual corner was met by David Perkins’ stunning left-footed volley from the edge of the area to open the scoring.

Lloyd impressed in his debut against Spennymoor Town on Tuesday and was pivotal in Fylde’s second goal. The Wigan Athletic loanee’s cross found Joe Piggott inside the penalty area before the striker expertly turned and struck his low effort past the goalkeeper to put Bentley’s side in control.

It was an initial cagey start to the second half at Mill Farm, with the visitors responding well in their efforts to find a route back into the game.

Neal was then called into action to deny Dan Ward’s effort before Louis Storey struck just wide after Emeka Obi misjudged a cross from the right-hand side.

Despite Gateshead having the majority of the possession in the second half, Bentley’s side stayed resolute to thwart the visitors and pick up another important three points.